We can’t stay demolitions, says SC on petition: Bulldozers in UP 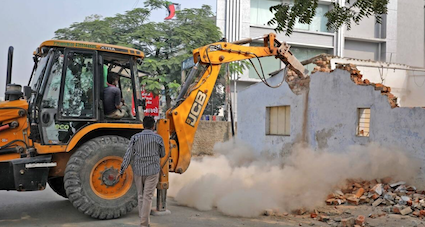 Addressing a petition to have the demolition drive by the UP government stayed, in a manner of revenge against those they target to have allegedly triggered the recent violence in the State, particularly in Kanpur and Prayagraj, the Supreme Court today said: “We can’t stay demolitions.”

Adding that at most they could say that it must happen in “accordance with the law,” the Supreme Court has posted the matter for further hearing on Tuesday, asking the Yogi Adityanath government to submit their response in three days.

“Everything should look fair…we expect the authorities to act only in accordance with law. Ensure safety so that nothing untoward happens,” said the judges.

An organisation called the Jamiat Ulama-i-Hind had approached the Supreme Court, asking it to act against officials responsible for what they called the “illegal” demolition of houses.

The violent protests against the comments on the Prophet has led to two persons killed in Jharkhand and private and public properties damaged or torched and policemen injured in Kanpur and Prayagraj.

“Adequate notices are must. What is being done is unconstitutional and shocking. It is being done by targeting a community,” CU Singh, lawyer for the petitioners, said.

He said a notice of at least 15 to 40 days was a must before any demolition.

The UP government asserted that it had followed the law and had only razed homes that were illegally built. Solicitor General Tushar Mehta said the demolitions had been carried out “irrespective of community”.

“The due course of law is followed for demolitions. The media links the demolitions with political statements unnecessarily,” said senior lawyer Harish Salve on behalf of the UP administration.

The petitioners expressed fear of more demolitions over the weekend and requested the Supreme Court for interim protection. “Petitioners rely on Newspaper reports. We rely on official records,” said Solicitor General Tushar Mehta, representing the UP government.

“If the house has been constructed without following any laws at all then they can’t say that they should not even be touched,” Mehta argued, adding that the petitions were based on “misconceptions and politics”.

The vacation bench of Justices Bopanna and Vikram Nath took up the case two days after some former judges and senior lawyers wrote to Chief Justice of India NV Ramana urging him to take note of the alleged incidents of illegal detention, razing of homes and police action on those linked to protests over the Prophet comments.