We have 173 MLAs: Shinde group confident 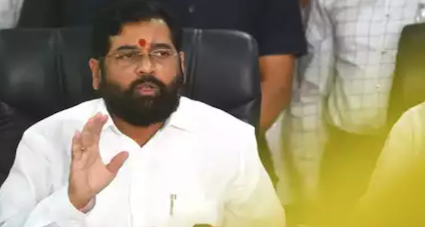 Shiv Sena rebel camp leader Eknath Shinde has claimed that they have more than 2/3rd majority and exuded confidence in winning the floor test scheduled to take place on June 30 in Mumbai.

Speaking to reporters on June 29, Eknath Shinde exuded confidence in winning the floor test scheduled to take place next day. The rebel camp leader also claimed that they have about 50 MLAs. “We have 50 people with us. We are in majority. We have more than 2/3rd majority and that’s why we are not worried about any floor test. We will pass in whatever process is there,” Shinder told reporters.

“Nobody can stop us because in a democracy numbers and majority are given importance. Nobody can go beyond the law and the Constitution in our country. This is the Shiv Sena of Balasaheb Thackeray. For the people of Maharashtra, for their prosperity and development, we are taking Balasaheb’s Hindutva ahead,” Eknath Shinde said.

It is pertinent to mention that earlier, rebel Shiv Sena MLA Sanjay Shirsat announced that the group led by Eknath Shinde will have the support of about 173 MLAs in the floor test. “We have the support of a minimum of 173 votes. We will take forward the legacy of Balasaheb Thackeray and will move forward with the Hindutva ideology,” he said.

Notably, this development comes following the Leader of Opposition in the Maharashtra Assembly Devendra Fadnavis meeting Governor Bhagat Singh Koshyari on Tuesday, asking him to convene a floor test.

The former Chief Minister submitted a letter to Koshyari, urging him to ask the Uddhav Thackeray government in Maharashtra to prove its majority in the 288-member Assembly. Fadnavis claimed that the ruling MVA coalition seemed to be in the minority as a majority of the Sena MLAs are “on the verge of ending the alliance”.

Soon after this, Governor Bhagat Singh Koshyari ordered a floor test to be conducted on June 30.

Meanwhile crying foul over the Governor’s floor test directive, Shiv Sena MP Sanjay Raut remarked, “The Governor was waiting for this moment only. SC has said you can come to court. This is unlawful and Governor is disobeying laws”.