What did Modi say? Jhunjhunwala shuts up Rahul Kanwal: Watch 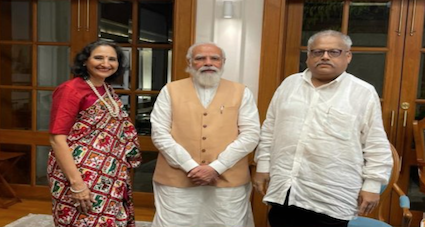 During the interaction at the event, Rahul Kanwal asked Rakesh Jhunjhunwala what he told Prime Minister Narendra Modi when he met him recently.

Responding with a witty remark, Jhunjhunwala said people do not discuss their conversations with wives on Suhaag Raat (wedding night).

His sarcasm implied that the conversation between him and PM Modi was a private matter, and he would not like to discuss that.

However, Congress used the video to make inappropriate comments on PM Modi and Rakesh Jhunjhunwala regarding the matter.

National President of the Indian Youth Congress Srinivas BV took to Twitter and tweeted the video with an inappropriate comment. Later it was turned into a concerted campaign.

The Congress member were even seen trolling PM Modi and Jhunjhunwala after the photos from their meet emerged.

Congress IT cell worker Vinay Kumar Dokania even referred to Jhunjhunwala as the ‘owner’ of PM Modi.