What do you think Puri thinks of Harsh Mander and Julio Ribeiro? ‘Padhe Likhe Murkh’ 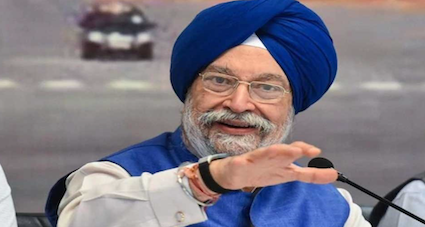 Puri, while addressing the press conference, said, “These former bureaucrats, many of whom are from foreign affairs ministry, have said in their letter that if reports are to be believed, the new Parliament building is being constructed because of superstitious belief that the old building is unlucky…, yeh padhe likhe murkh hi nahin hain, they are a disgrace (they are not only educated fools, they are a disgrace).”

A group of 60 former civil servants wrote an open letter to Prime Minister Narendra Modi and have asked the government to stop the Central Vista redevelopment amid the pandemic.

In the letter, the bureaucrats had said, “There is a great deal wrong with the conceptualization of the project. Rather than establishing the necessity of the project with sound prior studies on environmental and technical parameters, this project began, if reports are to be believed, because of a superstitious belief that the present Parliament building is ‘unlucky’, as well as with the thought of leaving a particular government and its leader’s impress on the architecture of Delhi.”

Hitting them for spreading misinformation, Puri asked them “What is its relationship with the pandemic? From where has this Rs 20,000 crore figure come up? The total cost of the projects currently under construction — the Parliament building and the Central Vista Avenue — is around Rs 1,300-odd crores. The Parliament building will cost approximately Rs 862 crore and the Central Vista Avenue Rs 477 crore.”

He informed that though it was an open letter, it never reached him otherwise he would have called them out earlier only. He even took a dig at them by referring as “vidvaans” who “need to get their facts right.”

Beyond that, he also targeted Congress that while they are now attacking the Central Vista project, it was their own leader who has written an article claiming that we need a new parliament building in 2012.