What if we discuss ‘their’ issues in our Parliament?: Jaishankar slams globalists agenda 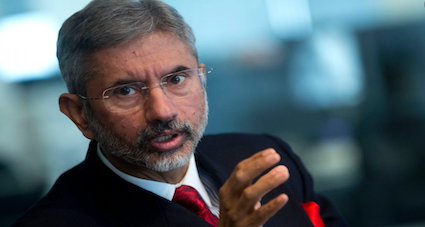 External affairs minister Dr. S Jaishankar would rather have we double down on false narrative than ignore it altogether.

Speaking to Times Now, Jainshankar said it’s time to call out agenda-driven groups than ignore them. This is a set of people who target India no ends up. They say unking things about the country and the government, both at home and abroad.

“The problem with putting up with it they then get to define the narrative. Calling it out is not defensive, it is called for and sensible,” the foreign minister said.

British Parliament recently, and a few member of US Congress before that, have been hyper-active on commenting on issues pertaining to India. Jaishankar says while doing so, they forget that the courtesy is a two-way street. What stops the Indian legislatures from discussing issues concerning other countries?

“Today if British Parliament debates on what they feel about Indian laws, it is very likely that Indian MPs will feel equally strongly about what is happening in UK or US or wherever else and want do to something similar as I said courtesy is a two-way street,” said EAM Jaishankar.

The foreign minister opined that India has transformed enormously in last few years and in relation to reaction from the global players, it’s important to understand a few important issues.

“One, there are very comprehensive, deep changes happening in the country. They are political, economic, social and cultural. These changes are, in a way, revolution but in a democratic way. Today, it is encountering borderless politics, where people who are politically not doing well domestically tends to extend the issue globally,” said Jaishankar, a thinly veiled dig at India’s Opposition joining hands with foreign forces in order to destabilise the country.

“A lot of noise that we are hearing is borderless politics meeting democratic transformation at home.

“Secondly, there is much stronger governance in the country today. There was a view in this country that equating freedom and liberty with bad governance or non-governance. So, when you start governing well through using legitimate tools of governance and delivering on the ground, it is being depicted as an infringement of freedom. There is also a desire to project leadership as a kind of something similar to a dictatorship. This country needs leadership”.

The recent noise in foreign circles lately has been on the farmers’ protest and subsequent riots during the Republic Day.

This is the second time in last few days when Jaishankar has called out such forces.

Jaishankar, on that occasion, had emphasised: “You used the dichotomy of democracy and autocracy. (Do) Do you want a truthful answer? It is hypocrisy. We have a set of self-appointed custodians of the world who find it very difficult to stomach that somebody in India is not looking for their approval…They invent their rules, their parameters, pass their judgements and make it look as though it is some kind of global exercise.

“We are the nationalist guys. We have given vaccines to 70 countries in the world. Tell me (about) the internationalist countries. How many vaccines have then given? Which one of these countries have said that while I do (vaccinate) my own people, I will do (inoculate) other people who need it as much as we do. Where are these people?”

These foreign forces had hit out at India, accusing it of shrinking civil liberties.

“Whatever you may say, in this country, nobody questions an election. Can you say that in those countries?” His remarks were directed at the United States, where Capitol Hill riots before the presidential elections are still fresh in memory.

Lest it be forgotten, the Freedom House is funded by notorious Open Society Foundation, run by billionaire George Soros who destabilises the government which are too independent in nature and not subservient to global forces.