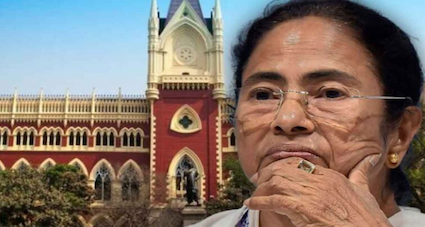 “If your lordships think that people can be hung on trees and still the matters can wait, I have nothing to say,” said a dejected advocate Priyanka Tiberwal after the Calcutta High Court granted another extension to Mamata Banerjee government in West Bengal to file in their reply in National Human Rights Commission (NHRC) damning report on post-poll violence in the State.

A fortnight back, after its fact-finding report on the ground, the NHRC had warned that in West Bengal the entire “might of the government machinery has been used” in the post-poll violence and that if the rot is not stemmed, it would be the “death knell for democracy,” the five-judge bench (Acting chief justice Rajesh Bindal, Justices IP Mukerji, Harish Tandon, Soumen Sen and Subrata Talukdar) today allowed the West Bengal government to file in their reply on July 31, for the matter to be heard on August 2.

After the bench observed “What is the urgency? Why not wait for another week,” Tiberwal, appearing for a petitioner, said in the present Bengal, “people would be forced to withdraw their complaints” as the State is “using many tactics on them.”

The NHRC teams, after visiting 311 spots in Bengal in 20 days, were horrified at the violence, rape, killings and extortion of helpless people by the nexus of what it termed as “politico-bureacratic-criminal nexus.”

“This is a deadly combination that has sinister implications…and will ultimately corrode the entire edifice…(it) also has larger national security implications.”

The West Bengal’s advocate general Kishore Datta sought and got extension, claiming that the NHRC had submitted additional complaints on  July 26 and hence the government sought a leave; and pleaded the court to adjourn the matter to a later date.

Tiberwal claimed that the state of West Bengal continued to “harass rape and sexual-assault victims” and how long could they (victims) hold their courage” in view of any further delay. “After another week, they would be forced to withdraw complaints, that is the urgency.”

Senior counsel Mahesh Jethmalani, appearing for another petitioner, contended: “Your Lordships know that extension of time leads to the disappearance of evidence. The police is complicit in this matter.”

This is what NHRC had said about the State government and its police in its 50-page report: “First FIRs were not registered; and if registered, milder sections were slapped; and yet 97% accused are out win the open and less than 3% are in jail…making a mockery of the whole system.”

Jethmalani also argued that the State was given enough time to file a comprehensive response to the NHRC report and if the state requires more time, a reasonable cause must be shown.

Closing the argument, the Bench observed: “More time sought to file further reply to NHRC’s report, even though we had granted time to the state as a last and final opportunity, however, we grant another indulgence to the State to do so on or before July 31.”

Thus the NHRC’s words, that “the nation of 1.35 billion people watches us with bated breath” would have to wait for another week. It’s observation that “the committee (NHRC) humbly requests that an early decision may be taken by the Hon’ble High Court because delay would result in continuation of misery of victims, many of whom may compromise with the situation” hasn’t been quite met with the urgency it sought.