When even RBI supplied fake currency!!! 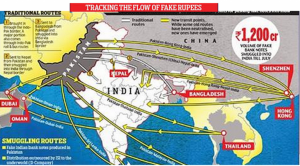 (This brilliant piece in Internet Hindu is being republished by NewsBred with sincere thanks for its readers. A must-read).

All the chairpersons and MDs of India’s top banks were meeting at Reserve Bank of India’s headquarters on the 15th floor of the Mint Street office in a special session that started at 7 pm. In Delhi, on the other hand, the top Cabinet ministers of the Modi government were meeting over an agenda regarding MoUs between India and Japan. None of the top bank chiefs or the ministers of the government were aware of what was to happen.

The Cabinet meeting ended at 7.30 pm and the PM went to meet the President to inform him about the plan. The ministers were instructed to remain in the meeting hall. The bankers on the other hand, were discussing the situation from the Non-Performing Assets (NPAs) in the economy. Just before 8 PM, the TV sets were switched on to listen to the PM, with the understanding that the meeting would continue after the PM address. Of course, the announcement from the PM was going to be earth-shattering for most bankers who had to rush back to their offices to handle the situation arising from the ban of Rs 500 and Rs 1000!

The story of demonitization starts way back in at least 2010 with a company named De La Rue and its role in fake currency in India. Sometime during 2009-10, the CBI had raided around 70-odd Indian bank branches along the India-Nepal border and found counterfeit currency with them.

That sent shock signals all over the intelligent community. Upon investigation, however, the intelligence officials found something even more scary! The branches had received the currency not from some smugglers, but RBI itself! RBI was sending counterfeit notes to the bank branches around the country! When the CBI raided the RBI, it found the same counterfeit currency in the RBI vaults in Rs 500 and Rs 1000 notes. The Central Bank of the country had been compromised beyond anyone’s imagination!

The counterfeit and fake currency which Pakistan was pushing into India was being collected and distributed by none other than the Reserve Bank of India! Almost like real… In a little known case involving counterfeit currency caught in UP and Bihar, the defending lawyer rather nonchalantly argued that what was the proof that it was fake? When the currency was sent to the Indian government labs, they indeed confirmed that the currency nabbed from the ISI agents was actually real! When sent to foreign labs, it was found out that the currency was so close to real that it was extremely difficult to prove it being counterfeit. In fact, the small difference that helped them prove it was not real was probably inserted on purpose! Such was the confidence and arrogance of the counterfeiters! It was found by the CBI on further investigation that the mischief was happening at the end of De La Rue, a company from whom RBI imports 95% of its currency paper.

In fact, RBI’s buy accounts for over 30% of De La Rue’s profits. At that time, De La Rue was blacklisted by the government and the company came to the point of bankruptcy with 2000 metric tonnes of paper lying unused! At that time, the De La Rue CEO James Hussey – godson of Queen Mother herself – resigned over what was called “paper quality issues”, which sounded fishy to begin with! “We don’t know whether the paper disintegrates under a drop of rain or whether there is just a fly in a roll of paper somewhere,” said one source. “The statement is so full of holes that is has created further suspicion.” De La Rue said the irregularities were of a “serious nature” but that it was “confident that neither the physical security nor the security features incorporated in the paper have been compromised for any customer and that the irregularities referred to relate only to testing of paper specifications at the relevant facility”.

Meanwhile, in 2010 another serious security lapse was exposed!

Outsourcing of Currency Printing by Government: Height of Betrayal

The panel observed that RBI’s system of assessment with respect to demands and supply of bank notes in the country was off the mark resulting in a gap. (source) The three companies to whom the Indian currency was outsourced were American Banknote Company (USA), Thomas De La Rue (UK) and Giesecke and Devrient Consortium (Germany). On November 3, 2011 a complaint was received by the Central Vigilance Commission (CVC) signed by “unnamed officers of the Ministry of Finance” – who said that the security was compromised not just by De La Reu, but also other companies – French firm Arjo Wiggins, Crane AB of USA and Louisenthal, Germany! What is most disturbing is that the information of compromise in security features of the paper for currency had at different times been withheld from the Home and Finance Ministry of India.

Following the quality breach by De La Rue, in September-October 2010, the government tested samples of currency paper supplied by other companies as well. On November 3, 2010, BRBNMPL ( Bharatiya Reserve Bank Note Mudran Private Ltd) — which signs currency note contracts on behalf of the RBI — wrote to the Directorate of Currency, Ministry of Finance, that currency paper supplied by Crane AB of USA and Louisenthal, Germany, had failed tests in Hoshangabad as well but cleared re-tests at the suppliers’ foreign laboratories.

The complaint notes, “BRBNMPL in their letter of 3rd November 2010, concealed the failure of paper supplied by Arjo Wiggins ( a French company) from the Ministry of Finance as detected in the tests conducted on Arjo Wiggins paper at Hoshangabad”.

In 2015, after Modi sought help in investigations in the fake currency notes from the US, it came out that the German company Louisenthal was also selling raw notes to Pakistan, resulting in a ban on the company. The Home Ministry has barred a German company, Louisenthal, from selling bank note paper to the Reserve Bank of India (RBI) after it discovered that the firm was also selling raw notes to Pakistan, according to a senior official.

“We are only keeping our interests in mind,” the official told The Indian Express. “We have proof that high-quality fake Indian currency notes are being produced in Pakistan and pushed into India through Bangladesh, Nepal, Sri Lanka and Vietnam. The availability of a common supplier could be one of the reasons behind such high-quality fake notes.” This is how the Indian currency was compromised at every point – RBI, Home Ministry, Finance ministry, and the Indian and Foreign printing presses.

Worse of all, our entire currency production was outsourced to unscrupulous forces who were merrily sharing the real stuff with Pakistan who was happily and arrogantly snubbing us and creating a havoc with our economy!

The free flow of Indian currency paper to Pakistan encouraged its government to set up 5 printing presses to print fake currency notes.these were smuggled to Nepal and Bangladesh (often on PIA flights). The currency entered India via UP and Bihar (Nepal border), via Malda in West Bengal (from Bangladesh), via Rajasthan border, Punjab border and via Chennai and Mangalore through the Indian expats from Gulf. (see photo). Pakistan used to pump in money to fund student bodies (like in JNU and Jadhavpur), media and journalists and also political parties to completely influence the elections.

As per General GD Bakshi, a prominent security and defense analyst, India has some Rs 16 trillion of Rs 500 and Rs 1000 in circulation (which is 96% of the entire money supply).

Pakistan was already printing Rs 15 trillion (Rs 500 / Rs 1000) with a view to push them in India to completely “unhinge” the Indian economy in what Gen Bakshi calls an “Economic Pearl Harbour”! This would have led to unprecedented terror strikes and runaway inflation and steep price rise, which would have spelt doom for India in many ways.

On the night of Nov 8th, when the Cabinet Ministers and the top bankers were caught unawares by the announcement of the Indian PM Modi on the ban on the notes – an act in extreme secrecy; all efforts to save Pakistan and its network were thwarted. Pakistan was checkmated.

All those whom you see now coming together to fight demonetization know exactly what was being planned and what led to all this. If they still choose to fight this act by the Modi government, you should know exactly from which team they are fighting this existential war of India’s future.