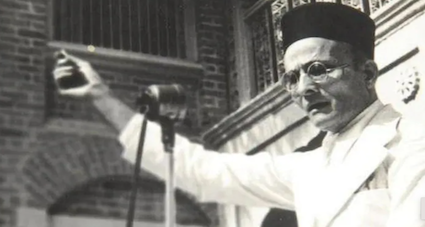 Historian and author Vikram Sampath launched a scathing attack on intellectual left-liberals for their selective approach to manipulate the narrative while claiming themselves to be the custodian of free speech and expression.

“Liberals don’t allow a different point of view to thrive. In India particularly, there is a very narrow narrative that needs to be pushed when it comes to history,” historian Vikram Sampath said.

He recounted the instance when the Congress government sacked the legendary music director Hridaynath Mangeshkar from All India Radio because it was based on Veer Savarkar’s Marathi song.

In one of the interviews, Hridayanath Mangeshkar has himself revealed that he was canned from his job at the All India Radio because he was composing tunes based on poems written by Veer Savarkar along with his sisters, Lata Mangeshkar and Usha Mangeshkar.

“I was working in All India Radio at that time. I was 17 years old and my salary was Rs 500 per month. It may be peanuts today but Rs 500 was considered a big fat salary during that time…but I was summarily fired from the All India Radio because I chose to create a musical composition for Veer Savarkar’s famous poem ‘Ne majsi ne parat matrubhoomila, sagara pran talmalala‘,” Mangeshkar said in Marathi.

Sampath mentioned how even after it was proved that Savarkar had no links to the murder of Mahatma Gandhi, a false narrative was weaved to project him as one of the co-conspirators of Gandhi’s assassination.

Sampath was speaking with Times Now for his recent concluding volume on freedom fighter Veer Savarkar, Savarkar: A Contested Legacy, 1924-1966. The book was released last week. It mentions how Savarkar has often been demonised by Left-Liberal intelligentsia, especially successive Congress government.