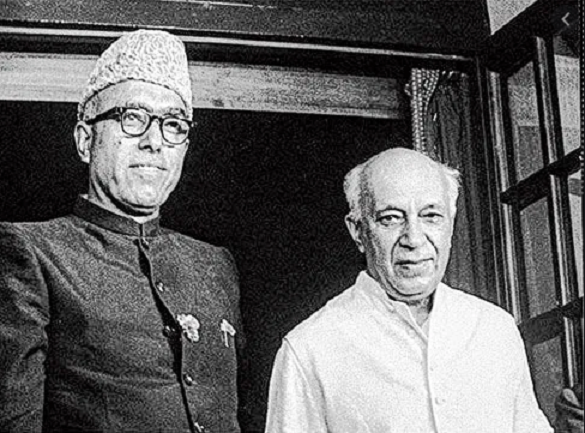 On October 26, 1947, Maharaja Hari Singh, the ruler of then princely State of Jammu and Kashmir, signed an Instrument of Accession with India. Governor General Lord Mountbatten accepted this document and the State became a part of India then onwards.

Around that time, the meteoric rise of Sheikh Mohammad Abdullah started as the outgoing monarch gave him powers to govern the State.

On March 5, 1948, Sheikh was made “Interim Administrator” by the Maharaja and after that day, the former never looked back over the next few years. Sheikh accumulated more powers using the delegation by the Maharaja and did all within his powers to undermine the latter.

So much so that, Sheikh worked for the banishment of the Maharaja from his beloved Jammu and Kashmir, a state that his forefathers had founded. Maharaja Hari Singh didn’t return to J&K in his life again and died in faraway Bombay (not Mumbai then) in April 1961. Only his ashes returned to Jammu, to be immersed in river Tawi which bisects present day city into two parts, one located on eastern bank and the older city on the western bank.

Sheikh’s powers continued to grow, mostly because of the unstinted backing he received from Delhi, particularly his personal friend, Prime Minister Pandit Nehru. At one time, Sheikh and those around him projected him as the “only leader” who mattered in J&K.

In 1951, the Constituent Assembly of J&K was constituted and Sheikh’s National Conference (NC) got 75/75 seats in it. It is interesting to learn if he won any fair democratic elections held in these constituencies.

Right now, suffice it to say that no elections were held in 73/75 seats. In two constituencies in the State, Independent candidates contesting against the official NC nominees were defeated. How this seemingly overwhelming majority was “manufactured” can be discussed on another day, in another write-up or two.

On June 7, 1952, the Constituent Assembly passed a resolution about adopting a separate flag for J&K when the process of making of a separate Constitution for the state was on. This “red flag” was a red herring to lots of political leaders of the mainland India. The sudden introduction and adoption of Article 370 in October 1949 had already raised suspicions.

In the beginning of 1953, Praja Parishad in Jammu announced that they will oppose Sheikh’s machinations and organise protests. The party was supported by Shyama Prasad Mukherjee, the founder of Jansangh.

By then, Permit System was being strictly enforced and under it, even the Prime Minister or President of India could enter J&K only after issuance of a document called “Permit” by the State government headed by Sheikh. In the beginning of the summer, Mukherjee decided to challenge this system and enter J&K without taking any permit for entry.

On May 11, Mukherjee was arrested in Lakhanpur, the entry point of J&K, and taken to Srinagar, almost 400 km away. There he died in custody after 44 days on June 23. Even then, PM Nehru continues to back Sheikh Abdullah. However, the relationship between the two PMs, of India and of J&K, deteriorated rapidly after that. So much so that on August 9, 1953, Sheikh was dismissed from his post for “losing the confidence of his cabinet” and kept in detention for several years.

The movement that Mukherjee had started in 1953 reached its culmination only 66 years later on August 5, 2019. That day, steps were initiated which led to the separate flag and Constitution of J&K vanishing from law books.

In 1953, before his arrest, Sheikh was reportedly working for creating a “Switzerland-type Independent Kashmir”. He was thus charged in what is known as “Kashmir Conspiracy case”.

Sheikh Abdullah, his trusted lieutenant Mirza Afzal Beg, and 22 others were charged as co-conspirators in the Kashmir Conspiracy Case. According to the details of this case, Sheikh led a group of people who were working for the secession of Jammu and Kashmir. They wanted it to be an independent country and used the support of US Ambassador in Delhi Loy Henderson to give momentum to this break India project.

Sheikh reportedly told Henderson that he was in favour of Kashmir seceding away from India and attaining the status of an independent country. The Kashmiri leader later meant senior Democratic Party leader Adlai Stevenson also and reiterated the same.

In fact, in July 1953, New York Times published a controversial map which strongly hinted at J&K becoming an independent country and gave the extent of its boundaries.

Incidentally, Nehru had entrusted the job of projecting Indian case in the UN to Sheikh. This gave an opportunity to the Kashmiri leader for repeatedly going abroad and meeting world leaders.

The charges in Kashmir Conspiracy Case were framed in 1958, five years after Sheikh’s dismissal. Another six years later, in 1964, the case against Sheikh and others was dropped for “diplomatic reasons”. Over a decade of being jailed mellowed Sheikh and he offered to play a role for setting the Kashmir issue with Pakistan by holding talks with General Ayub Khan.

It was Indira Gandhi who brought Sheikh back to power in J&K in 1975. Right from then onwards, all the Chief Ministers of the state, worked for “special status” of the State.