Where are feminists, seculars, media when TN CM’s mother is abused? 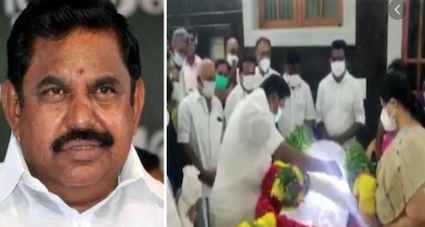 No feminist, no gender-equality advocates, no Own-Daughter groups, no so-called seculars, no media shriekers of moral pompousness have uttered a word after DMK leader and MP A Raja called the chief minister of Tamil Nadu as a person “ born of an illegitimate affair as a premature baby.”

This happened on Friday when Raja, campaigning for DMK’s Thousand Light constituency candidate Dr N Ezhilan, reportedly abused chief minister Edappadi Palaniswami. The DMK leader drew comparison with his party chief MK Stalin and chief minister E Palaniswami, claiming that the former was born of pure blood, by legitimate means, and thus is a true leader. Whereas Palaniswami was born premature and out of an illegitimate relationship.

“How disgusting was that comment which he made. Imagine what will happen to women if such people come to power. A lesson should be taught to people who say filthy (things) about women and motherhood.”

Crying openly, Palaniswami said mothers occupy a high position in Indian society irrespective of their wealth. He pointed out that those who disrespect them would be punished by God.

On Saturday, the All India Anna Dravida Munnetra Kazhagam (AIADMK) lodged a complaint with the Tamil Nadu chief electoral officer against the  offensive remarks A Raja. “The case was filed under the Indian Penal Code and Representation of People Act,” Commissioner Mahesh Kumar Aggarwal emphasised.

A Raja has been booked under Indian Penal Code Sections 127 (1) (inciting others to act in a disorderly manner), Sections 153 (provocative speech to cause riot), and uttering 294 B (obscene words). A similar case has been registered by the Meensuritti police on Sunday.

The development comes days ahead of the upcoming State Legislative elections in Tamil Nadu, which are scheduled to commence from April 6.