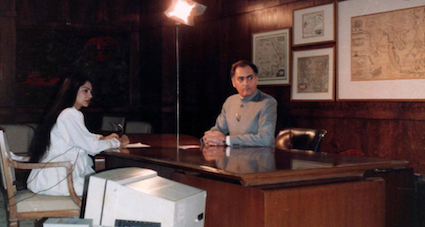 Recently people poured out their feelings remembering Rajiv Gandhi on his 30th death anniversary on May 20th. One among them was the interior designer Sunita Kohli, who in an article that was meant to praise Senior Gandhi, spilled the beans about how she was commissioned for the redecorations of the prime minister’s secretariat in South Block; the prime minister’s office in 1985 while as many as five lakh people continued to suffer due to Bhopal gas tragedy.

Rajiv took the post of prime minister on October 31, 1985, following the assassination of the former prime minister and his mother, Indira Gandhi. A month after, on the intervening night of December 2 and 3, methyl isocyanate (MIC), a toxic gas leaked from the Union Carbide factory, killing 3,787 people and affecting more than 5.58 lakh in the state.

While the country continued to suffer, months after, as per Kohli, Rajiv Gandhi asked her for the “restoration and redecoration of the prime minister’s office (PMO) and secretariat in South Block in 1985. He had wanted to restore the “dignity and ordered beauty” of the secretariat as envisioned by Herbert Baker.”

It is worthy to note that the first thing that Gandhi planned was the renovation of his office after assuming the post as designing and renovation of a building of such stature is a month-long process. One cannot ignore that the project was passed when India was reeling under the Bhopal Gas Tragedy.

Not only that, The main accused in the case, Warren Anderson, was given a safe passage by his government in the state and at the Centre. Moti Singh, the then Bhopal collector revealed that he was given a cellphone inside the room where he was detained to contact his allies in the United States who later pressured the Rajiv’s government to release him.

Anderson never returned and died in Florida, United States in September 2014 without facing any trial in Indian courts.

While it might be the first time for Gandhi to put his things above the country, it was not the last.

As per the report, “The privileged bunch included four friends of Rahul and Priyanka, Sonia Gandhi’s sister, brother-in-law and their daughter, her widowed mother, R. Maino, her brother, and a maternal uncle. Also present were former MP Amitabh Bachchan, his wife Jaya, and their three children…”

It was further confirmed by the former Navy Commander VK Jaitly (retired) that the Gandhi family had extensively used naval resources during their holidays.

“Rajiv and Sonia Gandhi used INS Viraat for travel to celebrate their holidays at Bangaram Island. Indian Navy resources were used extensively. I am a witness. I was posted on INS Viraat at that time,” he had said.