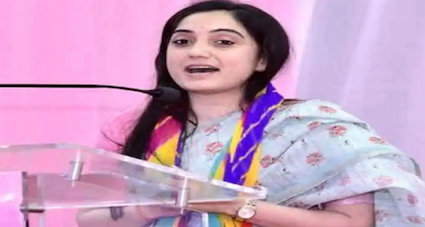 During a TV debate on the disputed Gyanvapi structure, Nupur Sharma, a spokesperson for BJP,  argued that people can’t mock Islamic beliefs in response to objectionable remarks against Hinduism. She pointed out that Prophet Muhammad had married a six-year-old Aisha, and he had consummated his marriage when she was nine years old.”

That’s absolutely true and readily established from core Islamic texts. Sharma’s offense here is apparently that she dared to point it out, when a good dhimmi would have known to keep silent and pretend it wasn’t true.

Hadiths, that Muslims consider authentic, record that Muhammad’s favourite wife, Aisha, was six when Muhammad wedded her and nine when he consummated the marriage:

Another tradition has Aisha herself recount the scene:

The Prophet engaged me when I was a girl of six (years). We went to Medina and stayed at the home of Bani-al-Harith bin Khazraj. Then I got ill and my hair fell down. Later on my hair grew (again) and my mother, Um Ruman, came to me while I was playing in a swing with some of my girl friends. She called me, and I went to her, not knowing what she wanted to do to me. She caught me by the hand and made me stand at the door of the house. I was breathless then, and when my breathing became all right, she took some water and rubbed my face and head with it. Then she took me into the house. There in the house I saw some Ansari women who said, “Best wishes and Allah’s Blessing and a good luck.” Then she entrusted me to them and they prepared me (for the marriage). Unexpectedly Allah’s Apostle came to me in the forenoon and my mother handed me over to him, and at that time I was a girl of nine years of age. (Bukhari 5.58.234).

Muhammad was at this time fifty-four years old.

A snippet of one such disturbing discussion about ‘killing’ Sharma was recently conducted by Islamists on a Twitter space titled, ‘Democracy, Freedom of Speech and Blasphemy.’ A screen recording of the same was shared by a Twitter user named ‘Anti Hypocrisy.’

At the very onset, an Islamist could be heard lamenting that there is no punishment for ‘blasphemy’ in India and how it encourages ‘them’ (Hindus) to allegedly mock the Islamic Faith.

He then went on to cite scholars and fatwas where the killing of the blasphemy accused becomes indispensable, as per Islam. “Take a small example: If a person says that the skin colour of Prophet Muhammad was black, then, the killing of such a person becomes an obligation,” he informed.

The Islamist emphasised, “Imagine if there is a fatwa for murder to wrongly identify the skin tone of the Prophet, then, imagine what should be done (to her). And none should come in favour of the blasphemy accused else he too will become liable for the same punishment.”

He then went on to slam the ‘moderate’ Muslims for not condoning barbaric punishment for acts of blasphemy. “Such Muslims should think if there is any Iman left in them…” he continued….

Nupur Sharma has been at the receiving end of the unabashed hatred from the Islamists and ‘left-liberal-secular’ journalists for expressing her views on Islam on Times Now on Friday (May 27).

During a debate on the disputed Gyanvapi structure, Sharma argued that people can mock Islamic beliefs in response to objectionable remarks against Hinduism. She pointed out that Prophet Muhammad had married a six-year-old Aisha, and he had consummated his marriage when she was nine years old.

The dog-whistling against Nupur Sharma was first initiated by alleged fact-checker Mohammed Zubair, who shared an edited version of the video to drive a hate campaign against her. Other Islamists, masquerading as journalists, also came out of the woodwork to incite violence against the BJP spokesperson.

(This piece is courtesy a blog by Robert Spencer)