Who sends kids to study in Pakistan? Well, Kashmiris do: Wake up India 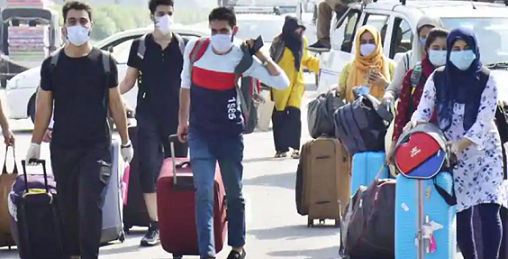 Do we need to trust Pakistan? Can we trust Pakistan? Should we trust Pakistan? How are these questions relevant and what is the context? Well, right now we are often discussing that in the event of a clash with China, will Pakistan also start a war on India’s western flanks? Most experts say that this cannot be ruled out as Pakistan is unlikely to let go off such an opportunity.

Amid such discussions in the media and talks about the possibilities of a two-front war, an event largely went unreported on Wednesday. It was the crossing over of 315 Kashmiri students to Pakistan via Attari Wagah border. Some reports in newspapers published from Jammu mentioned it.

In several newspapers published from Srinagar, there was no mention of this anywhere. That seems a trifle surprising as fight between Azerbaijan and Armenian forces has found ample space in these papers over past few days. Some debated this war even on their Edit and Op-ed pages. By all indications, it seemed like a case of deliberate underplaying.

Colonel V K Sahi, a veteran, who Tweets on @sahi_virendra tweeted: 315 Indian students from Kashmir proceeding to Pakistan for ‘education’. Are there any safeguards in place to ensure against their brainwashing and motivation against Indian national interests? Should we trust Pakistan? Can’t it be legalised move with evil motives?

The truth is more layered yet Col Sahi’s point is valid. These 315 Kashmiri students were already studying in Pakistan and had been stuck in India due to Coronavirus-induced lockdowns. Nasir Khuehmi, founder president of J&K Students Association said: “Most of these students are doing MBBS in various medical colleges and universities in Pakistan…Earlier, a batch of around 350 students had returned to Pakistan on September 10…There are around 1,000 students from Kashmir studying in medical and engineering colleges in Pakistan.”

Who ever heard of Pakistan as a destination for pursuit of excellence in any field of education? Other than promoting jehad in its madrasas run by the likes of Hafiz Saeed and Masood Azhar?

India has scaled down its ties with Pakistan significantly over the last 18 months. The trigger for this scaling down and deterioration was the February 14, 2019, Pulwama attack. The attack, in turn, had led to Balakot air strikes by the Indian Air Force, and later retaliation by Pakistan Air Force at Nowshera in Rajouri district.

Who are these Indian Kashmiri students studying in Pakistan? If truth be told, they are students sent to Pakistan on the recommendation of secessionist Hurriyat Conference. Allegations of massive corruption in nominating these students in various Pakistani institutions were made by Syed Ali Shah Geelani when he resigned from the Hurriyat.

Seriously, can it be ruled out that various intelligence agencies of Pakistan make no efforts to recruit these students as their “assets”? Do these students pursue their educational courses only while they study in Pakistan?

They had married Kashmiri terrorists who were staying in Pakistan Occupied Jammu Kashmir (POJK). During Omar Abdullah’s chief ministership, the Central government had announced an amnesty scheme for those who gave up weapons. Some steps were also announced for the rehabilitation of these terrorists.

These Pakistani women are wives of Kashmiri terrorists who tried to take advantage of the amnesty scheme. Different routes were officially prescribed for the re-entry of these men. However, some of these men entered India via Nepal, along with their wives and children.

It bears mention here that Nepal was not recognised as a legal route of ingress prescribed in the amnesty scheme. As such, all the Pakistani women were declared illegal entrants into India and they remain so till date. Given a choice, most of these women and children would like to maintain close ties with their families in Pakistan through travelling on Indian documents (passports).