Why Ambedkar wanted to burn down his own Constitution? 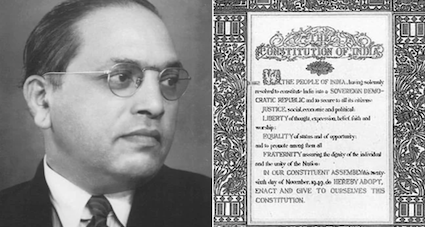 “I am quite prepared to say that I shall be the first person to burn it down.” These were the words of Dr B R Ambedkar on his own Indian Constitution for which he is lauded today.

In a long twitter thread, M Nageswara Rao, a former CBI director, has asserted that India’s Constitution is anything but secular and was a rehash of the 1935 Constitution of our colonial masters British which Congress had termed as “Slave Constitution.”

First to Ambedkar’s exact quote made on September 2, 1953: “People always keep on saying to me: `Oh, you are the maker of Constitution.’ My answer is I was a hack. What I was asked to do, I did much against my will…But I am quite prepared to say that I shall be the first person to burn it down.”

Nageswara Rao’s assertion is that Ambedkar was the head of the Constitution drafting committee but the draft in essence was supplied by B.N. Rau who had been appointed the Constitutional Adviser to the Constituent Assembly by the Nehru government—and who in turn did nothing better than rehash the 1935 Constitution.

As per Nageswara Rao, BN Rau was known to Jawaharlal Nehru since his student days in England, and around India’s independence was working in the Viceroy’s Secretariat.

Rau did so, the tweet implies, at the behest of Nehru who was vice-president of Viceroy’s Council which later became the interim cabinet and then interim government of which he became the prime minister.

So when the time came, Rau was appointed Constitutional Adviser to the Constituent assembly and Dr BR Ambedkar was made chairman of the drafting committee by the Nehru government.

(a) Rau furnished his Draft Constitution to the Drafting Committee in October 1947;

(b) The Drafting Committee, between October 1947 and February 1948, scrutinised, tweaked and added to Rau’s draft;

(c) On February 21, 1948 the Draft Constitution of India was submitted to the President of the Constituent Assembly.

Nageswara Rao claims the farcical exercise to adopt Rau’s Draft Constitution it was a quid pro quo to British for making Nehru the prime minister.

This is what Nehru said on December 13, 1946 while outlining the objective of the Constituent Assembly:

“British Government has a hand in its (Constituent Assembly’s) birth. They have attached to it certain conditions. We accepted the State Paper, which may be called the foundation of this Assembly, after serious deliberations and we shall endeavour to work within its limits.”

Nageswara’s Rao’s angst is that a Constitution should bind and glue all citizens. But the existing Indian Constitution denies majority Hindus equal rights and is divisive in nature. All our problems of regions, languages, religion and caste stems from it.

On August 5, 1948, Damodar Swarup Seth, a Socialist Member, moved a motion that the Constituent Assembly was not elected through universal adult franchise and that it didn’t have representative credentials to make a Constitution for India. His motion of course was rejected. But let’s hear him:

“Besides Sir if these minorities are recognised and granted right to establish/administer educational institutions of their own it’ll not only block way of national unity so essential for country of different faiths but will also promote communalism with disastrous results.”

Nageswara Rao’s opinion is that Articles 25-30 in the Constitution denies equal religious, cultural and educational rights to Hindus on par with Minorities.

Hindus can’t run their educational institutions, their civilizational knowledge and ancient texts are banished from public education, they can’t manage their own temples and religious properties; they don’t have the freedom to celebrate and perpetuate their ancestral traditions without undue State interference—all of which is permitted to minorities.

It makes Hindus 2nd class citizens and has laid the foundation for destruction of Hinduism.

Former Punjab Chief Minister Captain Amarinder Singh posed serious allegations against Navjot Singh Sidhu claiming that he had got a message from Pakistan to...

“Where was Shiv Sena in Ram Janmabhoomi campaign?…Challenge them if Sonia , Rahul could tweet on Balasaheb”