Why did Mizo police fired on Assam’s counterpart? The puzzle gains ground 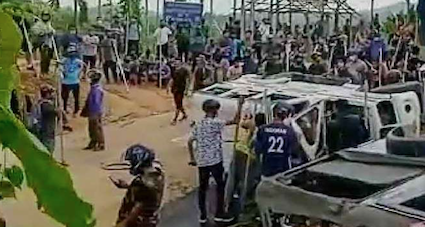 Patriotic People’s Front Assam (PPFA) sought clarification from the Mizoram government, asking how their police force fired on Assam police even though both are government recognized armed forces under the same set of rules.

“It was very shocking that the violent incident took place within 48 hours of Union home minister Amit Shah’s visit to Shillong, where in fact he met both the concerned chief ministers Pu Zoramthanga and Himanta Biswa Sarma, who incidentally the convener of BJP, promoted north east democratic alliance (NEDA),” PPFA said in a media statement.

On July 26 night, a violent clash broke out between forces of both Assam and Mizoram leading to the death of seven police officers of Assam. More than 50 people were injured including Cachar SP Vaibhav Nimbalkar, who has been admitted to the ICU.

“It is so unfortunate that the encroachers continue engaging in various criminal activities in those areas and on the way to safeguard those illegal migrants, our police personnel have to face the consequences,” said the PPFA statement adding that the Centre should introspect over those criminals seriously while initiating to find a sustainable solution to the border issues.

Meanwhile, after the Centre stepped in, both state governments have agreed to the deployment of a neutral Central Armed Police Force (CAPF) at the disturbed interstate border along the National Highway 306, a home ministry official said.

The Centre also initiated discussion with Mizoram’s chief minister Zoramthanga and Assam’s chief minister Himanta Biswa Sarma, both of whom were engaged in the war of words on the digital platform over the matter, and asked them to ensure peace along with the disputed border areas.