Why has Rahul Gandhi not vaccinated himself so far, asks Prasad 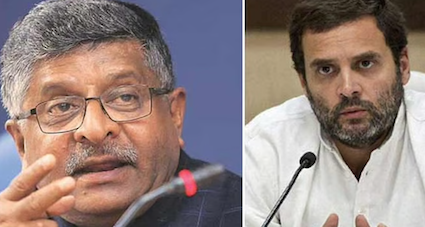 Why has Congress leader Rahul Gandhi not taken the vaccine shot yet?- A question Union law minister Ravi Shankar Prasad raised today  in a series of tweets, targeting the Gandhi scion for his latest rant that the Bharatiya Janata Party (BJP) government should open Covid-19 vaccination to all age groups.

“Why has Rahul Gandhi not yet taken the vaccine? Is it an oversight or he doesn’t want it or has he already taken one in many of his undisclosed trips to foreign locations but doesn’t want to disclose?”

India is not facing vaccine starvation but Shri Gandhi is facing attention starvation. Why has Rahul Gandhi not yet taken vaccine?Is it an oversight or he doesnt want it or has he already taken one in many of his undisclosed trips to foreign locations but doesnt want to disclose?

Taking a dig at Wayanad MP, Ravi Shankar launched a scathing attack and asked Rahul Gandhi if he has made full time lobbying his alternate career.

“First he lobbied for fighter plane companies by trying to derail India’s acquisition programme. Now he is lobbying for pharma companies by asking for arbitrary approvals for foreign vaccines” the BJP leader wrote on his Twitter handle.

Gandhi has questioned why state governments have not been given the authority to procure vaccines according to their need, the Congress leader wrote, “Even though public health is a state subject, our states have been bypassed right from vaccine procurement to registration.”

Responding to which, Ravi Shankar Prasad said, “Rahul Gandhi must know that shortage in Congress ruled states is not of vaccines but of basic commitment towards health care. He should write letters to his party’s governments to stop their vasooli ventures & concentrate on administering the lakhs of vaccines they are sitting upon”

Earlier in the day, Gandhi had written a letter to Prime Minister Narendra Modi in which he  wrote, “Historically, India has achieved abundant experience in designing and executing some of the world’s biggest vaccination programmes. Yet in the present case, we have managed to fully vaccinate less than 1% of the population in 3 months,”

The senior BJP leader was also quick to swipe Gandhi for his accusations and called him out for his blankness about the process.

“Fighting a pandemic is not a one trick game. Apart from vaccination, there needs to be adequate focus on testing, tracing and treating. Rahul Gandhi’s problem is that he doesn’t understand all this and his ignorance is compounded by his arrogance,” the BJP leader tweeted.

Meanwhile, prioritizing the need, India started the vaccination drive on January 16. The drive is currently in its third phase—everyone who is older than 45 is eligible to get vaccinated.