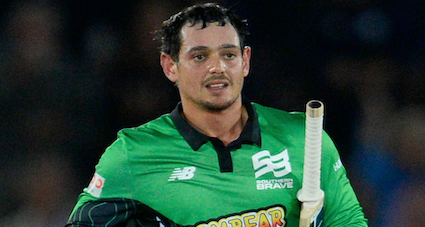 South African wicketkeeper-batsman Quinton de Kock has issued a statement on his refusal to take the knee in support of BlackLivesMatter movement in the match against the West Indies in the T20 World Cup on Tuesday. He has expressed disappointed that he has been dubbed racist for it.

“For those who don’t know, I come from a mixed race family. My half-sisters are Coloured and my step mom is Black. For me, Black lives have mattered since I was born. Not just because there was an international movement,” de Kock said.

“The rights and equality of all people is more important than any individual. I was raised to understand that we all have rights, and they are important. I felt like my rights were taken away when I was told what we had to do in the way that we were told.”

De Kock since then has had a discussion with Cricket South Africa and said he wished it had happened sooner. He claimed he was under the impression that he had the choice to do what he could do.

He continued, “I didn’t understand why I had to prove it with a gesture, when I live and learn and love people from all walks of life every day. When you are told what to do, with no discussion, I felt like it takes away the meaning. It I was racist, I could easily have taken the knee and lied, which is wrong and doesn’t build a better society.”

“I’ve been called a lot of things as a cricketer. Doff. Stupid. Selfish. Immature. But those didn’t hurt. Being called a racist because of a misunderstanding hurts me deeply. It hurts my family. It hurts my pregnant wife. I am not a racist. In my heart of hearts, I know that. And I think those who know me know that,” de Kock stated.

The wicket-keeper also admitted that he was shocked when the directive to take the knee was issued.

He said, “I think it would of been better for everyone concerned if we had sorted this out before the tournament started. Then we could have focused on our job, to win cricket matches for our country. There always seems to be a drama when we go to World Cups. That isn’t fair.”

De Kock also complimented Temba Bavuma, the captain of the South African team. He said that he will love to play for his country again.

Earlier, Bavuma has backed Quinton de Kock fully in the post match conference. “Quinton is an adult. He’s a man in his own shoes. We respect his decision. We respect his convictions,” he had said.