Why I took back CSK’s captaincy: Dhoni himself spills the beans 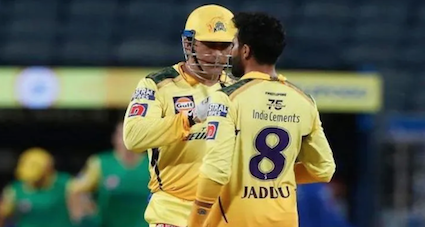 Mahendra Singh Dhoni has finally spoken out about taking back the captaincy of the Chennai Super Kings from his teammate Ravindra Jadeja. Dhoni claimed on Star Sports that Jadeja always knew he would lead the franchise at some point this year, and that he only oversaw the fielding positions for the first few games before allowing Jadeja to make his own judgments. On the other hand, he stated that the captaincy was impacting Jadeja’s individual game and that he would rather have him as a batter, bowler, and fielder than as a captain.

Dhoni said once a player becomes a captain, there are many things they need to take care of, including their own game. The 41-year-old added that the captaincy was having an effect on Jadeja’s preparation and his individual game. Dhoni remarked that they were also losing a great fielder in Jadeja because of his captaincy, highlighting how the Super Kings have been struggling to take catches in the deep mid-wicket area.

“So it was a gradual transition where I said okay this is what I will do. I will take care of the fielding angles and everything for the first couple of games. After that if it comes to me ‘No, you will have to do it yourself because that’s the only way you will learn what captainship is’. Spoon-feeding doesn’t really help the captain, on the field you have to take those crucial decisions and you have to take responsibility for those decisions,” Dhoni said in the post-match presentation.

“Once you become the captain, you have to take care of a lot many things and that also includes taking care of your own game. What I felt was, it was having an effect on his game also. When he was going into bat or when it comes to his preparation, is putting this burden affecting his game? Because I would love to have a Jadeja as a bowler, a batter, and a fielder. Captaincy fair enough. Even if you relieve the captaincy and you are at your best, that’s what we want. We were also losing a great fielder, we are struggling for a deep midwicket fielder, still, we have dropped 17-18 catches and that’s a matter of concern,” he added.

Jadeja took over as captain of the Chennai Super Kings before the start of the IPL 2022 season. In the first eight games of the season, the Gujarat-born cricketer led CSK to just two victories. CSK experienced one of the worst starts to an IPL season under Jadeja’s captainship. The franchise announced on Saturday that Jadeja has decided to step down as captain and has asked Dhoni to take over the leadership role. Dhoni guided CSK to a crushing victory against Sunrisers Hyderabad in his first match back as captain.