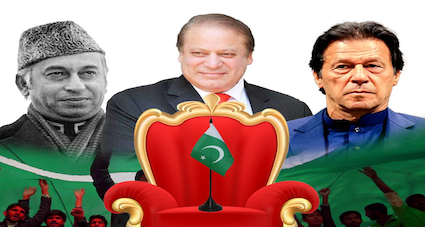 Pakistan so far has had 23 Prime Ministers since August 1947 when it came into being. None of the PMs, right from its first PM Liaquat Ali Khan to Imran Khan who was ousted in April this year, has completed his, or her, tenure.

The incumbent, Shehbaz Sharif, became PM when his predecessor Imran Khan had already completed over three and a half years. As such, the question of him doing a complete term doesn’t even arise. Questions are now being asked on whether Sharif will be able to complete the remainder of his term or forced to call for mid-term polls.

Mian Nawaz Sharif has the distinction of being the PM of Pakistan thrice but all his three tenures were cut short by upheavals unrelated to parliamentary democracy. He was elected 12th PM of Pakistan in November 1990 but was dismissed by President Ghulam Ishaq Khan in April 1993. He challenged the dismissal in the Supreme Court and won the case.

In his second tenure, Nawaz became PM again in February 1997 but was deposed in October 1999 in a military coup by General Pervez Musharraf. He became the PM of Pakistan for the third time in June 2017 but was dismissed from office by the Supreme Court due to his involvement in Panama Papers case.

Besides Nawaz, Pakistan People’s Party leader Benazir Bhutto has also remained PM of her more than once but could not complete her tenures on both occasions. In her first tenure, she was the PM from December 1988 to August 1990. In her second tenure, she rose to the top executive post in October 1993, only to be dismissed by President Farooq Leghari in November 1996.

On 18 occasions, prime ministers have been dismissed from corruption allegations to military coups to forced resignations. Oh yes, there was one assassination too (Zulfiqar Ali Bhutto).

In 1993, no less than five occupants took over prime ministership. The shortest tenure for a prime minister was two weeks (Noorul Amin); the longest four years and two months (Liaquat Ali Khan).

On delving a bit deeper into why no PM has ever completed his/her tenure in Pakistan, we find that the Pakistan Army had, on most occasions, played a part. If it was not involved directly as an institution, it overshadowed the events that shaped the ouster of several PMs mid-term.

The Pakistan Army was part of the action which led to Imran’s ascension to power due to backing from Inter Services Intelligence (ISI) chief Lt Gen Faiz Hameed in 2018 elections. It is widely believed that the same military played a role in the Imran’s ouster by non-action, and allowing opposition parties to bring a no-confidence motion against him.

In brief, the Pakistan Army and proxy power are never far from one another. Whatever be the popularity of a democratic party among masses, their real and permanent masters are the Generals. The PMs have served in their office as long as the Pakistan Army pleased. Its displeasure is a sure disaster for politicians as Imran’s ouster indicates. From being the blue-eyed man of General Qamar Bajwa, who had granted a three-year extension to the Army Chief, Imran fell foul of the Army and lost power.

It is safe to say that most of the Pakistani governments have been hybrid governments. Hybrid governments as the political masters visible upfront, like PM Shehbaz Sharif is at present, are masters just in name. The real power is wielded by powerful Army Generals who are one up on democratically elected political leaders. Presently, Shehbaz is touring the flood-affected areas in Pakistan and so is General Bajwa!

A couple of days ago, at a public rally in Faisalabad, Imran allegedly said that the present government was opposed to mid-term elections as it wanted the next Army chief to be its man. Incidentally, Bajwa’s tenure of 3+3, which began in November 2016, is coming to end in November this year.

“They want to bring their own army chief…they are afraid that if a strong and patriotic army chief is appointed then he would ask them about the looted wealth,” Imran had said.

Interestingly, Imran remains undeterred so far, and has refused to use a conciliatory approach, despite facing contempt of court proceedings. An anti-terrorism case too and together this may lead to his disqualification from contesting elections for a public office. It may seem ironical but Imran’s popularity has soared after his ouster from office.

Due to his confrontational attitude towards the government and the military establishment, it seems Imran may be “squeezed in the coming weeks’’. If that happens, and Imran is either disqualified or even jailed, two likely scenarios emerging now, protests may erupt in many parts of Pakistan. In that case, the country may have to face a debilitating triple whammy of economic, political and natural causes simultaneously.

With losses due to widespread floods in most parts of the country, Pakistan is reported to have suffered economic losses of over $10 to $12 billion. Add to it the tough conditions imposed by the International Monetary Fund (IMF) on its government, massive public discontent is just around the corner. It the political situation goes out of hand a wee bit, our western neighbour can be in for a lot of serious trouble.