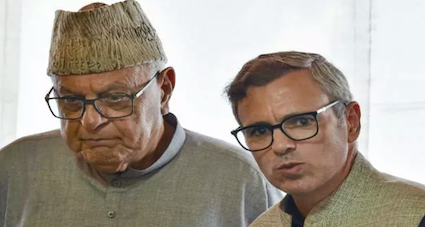 Former National Conference (NC) leader Devendra Singh Rana’s joining the BJP in Delhi on Monday is perhaps one of the most devastating blows in recent times for Omar Abdullah and party patriarch Dr Farooq Abdullah.

One cannot easily recall another incident of similar political gravity the father-son duo have faced in the past two decades. Definitely not in the Jammu region where Rana has covered every nook and corner during this time. Incidentally, Dr Abdullah had handpicked Rana for his son Omar who was projected as the party’s chief ministerial face in 2002 assembly elections.

The 2002 assembly elections in Jammu and Kashmir were a long drawn process which lasted for over three months. The campaigning for first round of these elections started in border Poonch and Rajouri districts in July and the last round of polls was held on October 8 in Doda district. The results of these elections were declared on October 10 that year. It was an election that the NC lost, and its tally came down from 57 to 28 (down by 29), and the blow became heavier as Omar lost from Ganderbal constituency.

During those elections, Rana was Omar’s constant companion flying to remotest parts with him, and being in the same vehicle with him on most journeys. If one person could claim he had spent more time with Omar than even his shadow bodyguards, or his immediate family members, it sure was Rana.

Now, in 2021, almost two decades later, the early days of month of October have once again brought hugely negative news for Abdullahs by way of them losing Rana. In every conceivable way, Rana had played Man Friday to Abdullahs, particularly Omar, and it is not a blow NC will be able to overcome easily.

Rana’s exit from NC will have a cascading effect on the party across the Jammu region and on Monday itself several party leaders quit the NC. They also declared support for Rana and in the coming days these people too will join the BJP in publicised ceremonies. Rana is deemed far more accessible than his elder brother, Dr Jitendra Singh, MoS in PMO holding some portfolios independently. Most journalists working in Jammu used to routinely meet Rana and interview him in different languages, be it Hindi, English, native Dogri or Urdu. This is likely to continue in the days to come.

Rana was accompanied by Surjit Singh Salathia, a former NC cabinet minister, when he joined the BJP. Both filled up membership forms of the BJP and these signed forms later became viral on various social media platforms. The ceremony at the BJP office in Delhi was solemn and subdued, dignified but one that did not give any inkling of what lies in store for the days ahead for the NC. Rana was provincial president of the NC for a decade and knew hundreds of party workers personally.

Some NC leaders have tried to brazen it out that Rana’s leaving the party will not affect it in any way. They also claimed that he was never loyal to its ideology and was a one constituency wonder whose writ ran in Nagrota assembly segment alone. Nothing can perhaps be farther from the truth as Omar and Farooq have maintained a dignified silence on the issue and not offered any comments. They understand Rana’s value to them personally, and for the NC in Jammu, much better.

Advocate Rattan Lal Gupta has been made the next provincial president of the NC in the Jammu province to succeed Rana. But he is every bit a lightweight as compared to the man he succeeds. Filling up Rana’s shoes is a Herculean task for Gupta. Figuratively as also literally as Rana wears size 11+ specially crafted shoes!