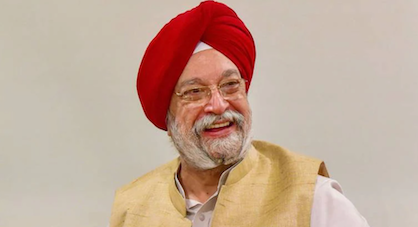 Minister of Petroleum Hardeep Singh Puri backed the taxes on petrol and diesel saying such levies funded government schemes to provide free Covid vaccines, meals, and cooking gas to millions amid the pandemic.

He was addressing a press conference at the end of the India Energy Forum industry event. This comment comes in the wake of opposition parties’ demands that the government reduce fuel taxes.

Puri said domestic rates are linked to international oil prices, which have shot up due to a variety of reasons which need to be understood.

“I think this simplistic political narrative we get in India (that), ‘Prices have gone up why don’t you reduce your taxes’… so every time price goes up due to something else, it says you axe your own feet in the process,” he said.

According to the minister, the country completed one billion vaccinations, fed 90 crores, people, for a year during the pandemic by providing three meals per day, and implemented the Ujjwala scheme, which provided free cooking gas LPG refills to 8 crore poor people. “All this and much more with that Rs 32 a litre excise duty (levied by the Central government),” he said.

Launching a direct attack on Congress, Puri said while the Centre levies specific excise duty on petrol and diesel, which does not change if the oil prices fall to USD 19 per barrel or rise to USD 84, state governments levy ad valorem rate of VAT whose incidence goes up with every hike.

He said petrol price was decontrolled in 2010, effectively making it linked to world markets. Diesel prices were freed from government controls in October 2014 by the Modi government.