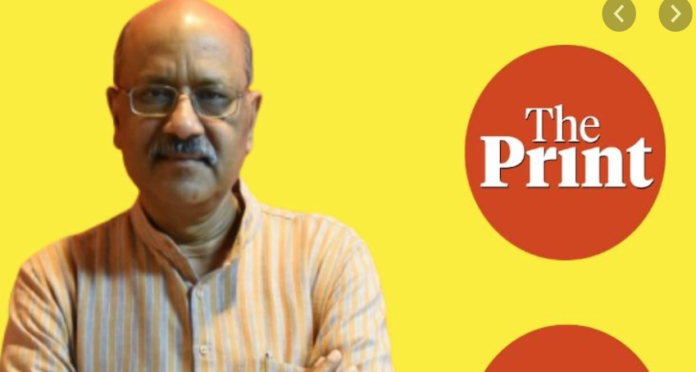 Shekhar Gupta needs little introduction on the landscape of Indian media. He was once editor of Indian Express and now runs ThePrint news website. Till recently, he was also the president of the Editors’ Guild of India.

Gupta is also alleged to wear the Left-Liberal lens and from time to time his articles and ThePrint are said to run down the cause of Conservatives (Read BJP/RSS) in this country.

The latest such instance occurred on Thursday. Activist Greta Thunberg had accidentally released the “toolkit” which revealed the global forces who had come together to put India on a spot on protesting farmers. They had planned in detail demeaning India on Republic Day and the hoisting of a religious flag on Red Fort, insulting India’s tricolour.

All this vested interest of global forces, the destructive streak of billionaire George Soros, a set of Indian media and propaganda websites was exposed in a video which YouTube, Google’s online video-sharing platform, took down in tearing hurry.

Now all this found mention in ThePrint which detailed on YouTube taking down the video, exposing links between George Soros and Greta Thunberg “toolkit” It brings attention on propaganda websites such as AltNews.  But soon thereafter, ThePrint deleted its report and didn’t offer any specific reason.

If one searches Google now, it show the article in cache but the article appears to have been deleted by ThePrint. Even if one goes to Google’s alternative, DuckDuckGo search engine, the cache does appear but the piece doesn’t and shows a 404 error.

If deleted as it apparently is, one wonders why ThePrint would unpublished and delete a report that spoke of biotech tyranny and also details a video that tells about the George Soros anti-India fund and the media houses which benefit out of it.

The video was released by the Strings, a popular Indian YouTuber, who’s some 3,75,000 subscribers on YouTube. In the video, the Strings exposes that AltNews is certified by International Fact-checking Network (IFCN), backed by one Poynter Institute.

A couple of years ago, on the forum of Davos’s World Economic Forum, Soros had committed $1 billion towards fighting nationalist forces. He had accused Narendra Modi of creating a “Hindu nationalist state.

Soros is accused of interfering in other countries through his network of NGOs. Viktor Orban’s Hungary and Vladimir Putin’s Russia have taken steps to curb his influence in internal matters. In India too, there are several organisations and NGOs which are connected to George Soros.