Why twitter is flooded with Kangana even though she is banned by it?: Watch 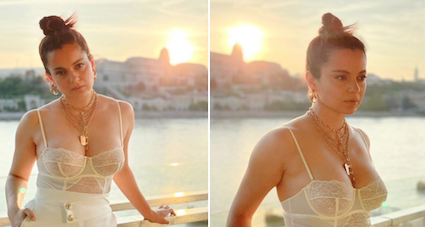 Even after being suspended on Twitter, actress Kangana is making waves on this social media platform after she finished filming her upcoming spy thriller ‘Dhaakad’.

Kangana Ranaut has been tirelessly shooting in Budapest for Dhaakad. The actress also took to Instagram stories and shared a glimpse of her team as they cheered for her on the last day of the shoot.

In one of the videos she wrote, “It’s a wrap for me… Missing them already” with a sad emoticon followed by the hashtag Dhaakad.

Earlier also, the Queen star shared a fierce post on Instagram where she mentioned that her character of Agni will remain with her forever.

Directed by Razneesh Razy Ghai, the film is based on issues of child trafficking and crimes against women. It features Kangana as officer Agni along with Arjun Rampal and Divya Dutta.

Ranaut is also awaiting the release of the multilingual biographical film Thalaivi, about the life of J Jayalalithaa, former Tamil Nadu chief minister and cine star.