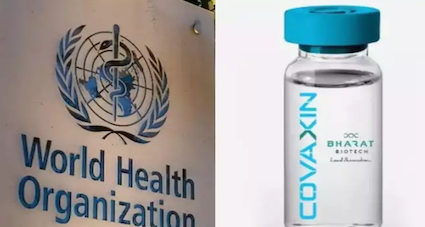 On March 1 this year, over six months ago, Prime Minister Narendra Modi got his first dose of Bharat Biotech’s Covaxin at All India Institute of Medical Sciences (AIIMS). He then tweeted a picture of himself getting the vaccine shot from Sister P Niveda of Puducherry. In the tweet, he urged all those who were eligible to get themselves vaccinated as soon as possible to eradicate the scourge of Covid-19.

On April 8, a little over a month later, he got the second dose of vaccine at AIIMS and it was administered by a nurse from Punjab. Since those early days, India has come a long way crossing a milestone of vaccinating 100 crore citizens. The two vaccines used by India during the past nine months have been Serum Institute of India’s Covisheild and Bharat Biotech’s Covaxin.

Among the 100 crore being counted as partially, or fully vaccinated, a good number has been given Covaxin. Initially, those above 60 years of age were given the vaccine dose, then came those between 45 years and 60 years, and the last category to be vaccinated was those aged between 18 and 45 years. In many states, including Jammu and Kashmir, those between 18 and 45 years were given Covaxin only, two doses 30 days apart.

This is causing serious problems to thousands of Indians wanting to travel abroad as Covaxin is not recognised by the World Health Organisation (WHO). Technically, the WHO has given permission to many vaccines and the process is called Emergency Use Listing (EUL). This denial and recognition for Covaxin means all those Indians who got this vaccine are treated as unvaccinated when they travel abroad.

This has led to a situation where the European Union (EU) and the US are not willing to allow Indians who have been vaccinated by Covaxin to enter their countries. Since their official status is that of being unvaccinated, it is also not clear whether they will have to get vaccinated again. With a vaccine that has got the EUL from the WHO already, or undergoing a mandatory quarantine of 10 to 14 days will be enough. This means that nobody, falling in the age group of 18 to 45 years, in spite of having received both the doses of Covaxin months ago is eligible to travel to either EU or the US.

This appears largely due to the immense influence pharmaceutical lobby of the western nations, represented by Pfizer, Moderna and a couple of such others wield. It seems plausible that even China could be influencing WHO to deny EUL to Covaxin for as long as possible.

Citing one reason, or the other, the WHO has kept Covaxin on hold and not cleared its usage. WHO chief scientist Dr Soumya Swaminathan had tweeted last Sunday (October 17) that the technical advisory group will meet on October 26 to take a decision on Covaxin. She also said that WHO had been working closely with Bharat Biotech to complete the dossier. As if reassuring Covaxin manufacturers, she said that “our goal is to have a broad portfolio of vaccines approved for emergency use and to expand access to populations everywhere’’.

Incidentally, a meeting of the WHO experts was scheduled for early October and it was to decide on the grant of EUL to Covaxin. The world health body had declared earlier that the Covaxin manufacturer had been submitting “data on a rolling basis and submitted additional information on September 27’’.

Chinese vaccine Sinopharm was given EUL by the WHO within a span of only 10 days after the submission of data. The decision to approve Chinese Sinopharm’s vaccine was taken by the WHO’s technical advisory group which had met on April 26 to review the technical data. By May 7 (only 12 days later), it was announced that Sinopharm vaccine had been approved. Compare that to the delay in granting approval to Covaxin, and incidentally, Bharat Biotech had started its communication with the WHO for getting EUL as early as April this year.

Are we to believe that WHO is dragging its feet on Covaxin as a lobbyist for favoured Pfizer, Moderna or Chinese vaccine? The vaccines made by Pfizer and Moderna cost around $35 and a Covaxin shot barely costs 1/10th of that, or lesser, may be $3. This huge price difference can be behind the denial of necessary EUL licence and approvals to the Indian vaccine.