Will he or won’t he: Ganguly stokes speculation on joining politics ahead of Bengal polls 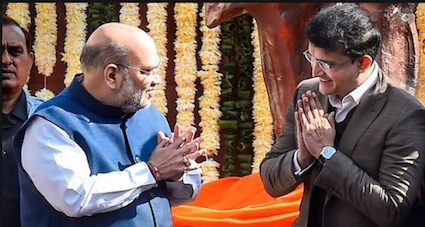 Could former India captain and present Board chief Sourav Ganguly enter the political fray in the forthcoming Bengal assembly polls on behalf of BJP? “Dada” for the moment has let the question hang in the air.

Ganguly was in conversation with Arnab Goswami on Republic TV on Monday and presented a straight bat to the speculation that he could be seen in a political avatar soon.

“I am just 48. You never know where life takes you. It’s all about opportunities”, said Ganguly.

“I need to like the work and see how it influences my life. The thought process has changed since I now have children, family. You need to evaluate how it affects their lives too. How much does it take away from your family/friend time? It (politics) has a total impact on your life.”

On being further prodded, Ganguly stressed: “I don’t think much about politics. I am happy with my life. I do what pleases me. I respect people and expect the same from them… I firmly believe in this policy. I firmly believe that if I belittle someone, I will belittle myself as well. It’s a shadow of your character. I believe in all these values “

The former Indian captain replied, “Politics is not bad. We had (have) the greatest of leaders in the country who influence the population. So why should politics be bad? Good people should be in politics because it decides your life.”

“I don’t take my decisions immediately, without any forethought,” said Ganguly, “Let time tell. You don’t know. Let’s see where time takes us.”

Ganguly works in tandem with Jay Shah who is the Board secretary and son of home minister Amit Shah. His wife, Dona Ganguly, a well-known classical dancer, had performed at BJP Mahila Morcha’s Durga Puja in Kolkata in recent past.

Trinamool Congress, it must be recalled, had ‘advised’ him not to join cricket.

Ganguly recently has had health issues and suffered from a heart attack.