Withdraw remarks against Nupur: Petition with Chief Justice of India 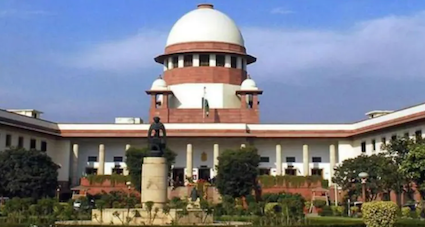 A petition has been filed with the Chief Just of India NV Ramana to withdraw the remarks made by a vacation bench of the apex court itself where Nupur Sharma was severely criticized, including blaming her for the violence by Islamists and murder of Kanhaiya Lal in Udaipur.

The petition, filed by Gau Mahasabha leader Ajay Gautam requested the CJI for orders to withdraw the oral remarks of the two judges while rejecting the writ petition of Nupur Sharma to club all FIRs against her and transfer them to Delhi.

In the petition sent to the chief justice, Ajay Gautam has requested the court to issue orders to Justice Surya Kant to withdraw his observations while hearing the petition of Nupur Sharma, so that she gets the chance of a fair trial. He also requested that the comments of Justice Kant should be declared uncalled for.

Ajay Gautam has also petitioned the CJI to issue Su Moto order to transfer all cases against Nupur Sharma to Delhi under Article 20(2) of the constitution, and direction of a fast track trial keeping in mind the threats to her.

Talking to Times Now over the issue, Ajay Gautam said that it was shocking that the judges made the comments when no investigation or any court have decided whether Nupur Sharma is guilty or not. He said that everyone including the judges must follow the rule of the law, and the rule of law does not permit such observations. Saying that it is wrong to blame Nupur Sharma for the violence, he said that this not a healthy sign for Indian judiciary.

The petitioner further said that the observation of the judges by linking Nupur Sharma’s comment with the Udaipur murder justifies the brutal beheading of Kanhaiya Lal, and thereby gives clean chit to the killers justifying their motive of murder.

Earlier in the day, the vacation bench of the Supreme Court of India had shocked people with remarks on Nupur Sharma. While Nupur Sharma is facing death threats from Islamists for allegedly insulting Prophet Mohammad, Justice Surya Kant had actually blamed for the violence unleashed by Islamists across the country, including the brutal beheading of Kanhaiya Lal Teli in Udaipur.

The justice had said that she should apologise to the entire nation for the violence by Islamists, because the court deemed that her comments in a TV debate were responsible for the riots and murders. Justice Surya Kant had said, “The way she has ignited emotions across the country… This lady is single-handedly responsible for what is happening in the country.”

The bench also said that while it is norm to club FIRs when multiple cases are registered for the same offence, Nupur Sharma does not have that right. The court said she had no rights to comment on Prophet Mohammad, and therefore she has lost the judicial right available to common citizens.