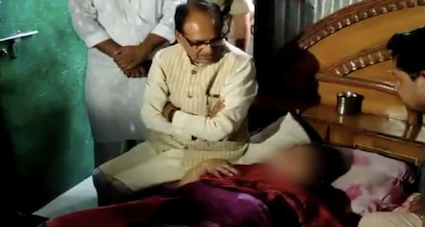 A woman in Madhya Pradesh’s Bhopal underwent surgery and received as many as 118 stitches on her face after a group of men attacked her with a paper cutter when she resisted their attempts to sexually assault her, the police said today.

The incident occurred in the TT Nagar area of Bhopal on Friday.

Police said that the woman went to the Sree Palace Hotel in TT Nagar’s Roshanpura with her husband on Friday when an altercation erupted between her and the accused over bike parking.

They made obscene comments and whistled at her, while her husband was inside the hotel. The woman confronted the accused, and also slapped one of the three men, officials said.

She then joined her husband at the hotel.

When the couple came out of the hotel, the accused who were reportedly irked with the woman for standing up to them, attacked her with the paper cutter, officials said.

Her husband then rushed her to the hospital where the doctors conducted a surgery to treat the grievous injuries.

Police said that two accused – Badshah Beg and Ajay alias Bitti Sibde – have been arrested, and the search is on to nab the third accused.

The arrests were made after police scoured the CCTV footage of the hotel.

Madhya Pradesh Chief Minister Shivraj Singh Chauhan this morning visited the couple and assured them of complete assistance for her medical treatment.

Mr Chauhan praised the woman for her courage and awarded her ₹ 1 lakh. “She has set an example for others,” the Chief Minister said.

“The guilty won’t be spared and stringent action will be taken against them,” he added.