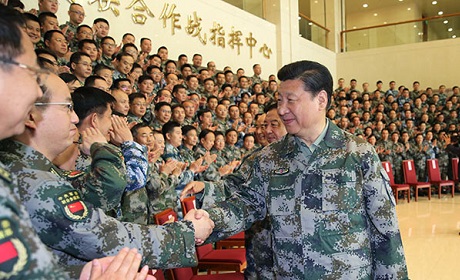 China’s president Xi Jinping wants its People’s Liberation Army (PLA) to be ready for “War”—whether he meant by it India, the United States or Japan, the three main antagonists of Beijing—wasn’t clear.

Xi was giving a speech at Guangdong military base on Wednesday to commemorate the 40th anniversary of the Shenzhen Special Economic Zone.  According to new agency Xinhua, during an inspection of the PLA Marine Corps in Chaozhou City, Xi told the soldiers to maintain a “state of high alert” and called them to be “absolutely loyal, absolutely pure, and absolutely reliable,” reported CNN.

Meanwhile, it is learnt that the White House has notified US Congress of its plan to sell three advanced weapons system to Taiwan, including the advanced High Mobility Artillery Rocket System (HIMARS).  In response, China’s foreign ministry spokesperson Zhao Lijian had called on Washington to “cancel any arms sales plans to Taiwan immediately” and “cut all US-Taiwan military ties.”

Even though Taiwan isn’t controlled by China, the latter insists its an integral part of their territory. It has increased its drills around Taiwan. Almost 40 Chinese warplanes have crossed the median line between the mainland and Taiwan on September 18-19. In response, the island’s president Tsai Ing-wen called it a “threat of force.”