Yakub Memon took 257 lives; his grave in Mumbai is beautified 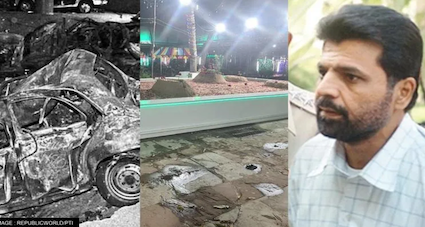 Yakub Memon – a convicted terrorist in the 1993 Mumbai blast wherein 257 people were killed and about 1,400 were injured, was finally punished for his crimes when he was hanged at the Nagpur Central Jail on July 30, 2015, and was buried at Bada Kabarastan in the Marine Lines area of south Mumbai.

However, images of LED lights and marble tiles installed on Memon’s grave in Bada Kabarastan came to light and opened the wounds of the blast that shook the country’s financial capital in 1993.

Yakub Memon assisted his brother Tiger Memon and Dawood Ibrahim – the main conspirators of the 1993 Mumbai bomb blasts. He assisted financials in planning and executing the bombings. He used to handle Tiger Memon’s funds, funded the training of terrorists, purchased vehicles used for the bomb blasts, and stockpiled the weapons.

The Central Bureau of Investigation (CBI) subsequently arrested Yakub in 1994. He was later convicted by the TADA court and was sentenced to death in 2007. After his petitions in the Supreme Court against his death sentences were rejected along with rejection of clemency by then President Pranab Mukherjee, Yakun Memon was finally executed on July 30, 2015, at Nagpur Jail.

LED lights and marble tiles were installed on the 1993 Mumbai blast convict Yakub Memon’s grave in Bada Kabarastan in the Marine Lines area of south Mumbai. Pictures from the cemetery show LED lights focusing on Memon’s grave, which has been beautified with white marble boundary.

According to sources, electricity was supplied to the lights placed on the grave through the electricity connection in the cemetery. The place where Yakub Memon’s body was buried, the Bada Kabrastan site, comes under the jurisdiction of the Burial Waqf Board. It is pertinent to mention that after this came to the fore, the lighting arrangement was removed.

Taking to Twitter, BJP MLA Ram Kadam said, “Uddhav Thackeray was the Chief Minister. During that period, the grave of the dreaded terrorist Yakub Memon, who carried out the 1993 bombing in Mumbai at the behest of Pakistan, turned into a mausoleum. Is this their love for Mumbai, is this their patriotism? Along with Uddhav Thackeray, Sharad Pawar and Rahul Gandhi should apologize to the people of Mumbai.”

In a shocking development, NC president Farooq Abdullah’s brother Mustafa Kamal offered a justification of the beautification of terrorist Yakub Memon’s grave. “When militants were active here, many people consider them as their heroes. Irrespective of the cause of the militants, they could have remained alive. But they chose the path of violence. Despite this, people like them. So, what can we do? The same applies in Mumbai.”