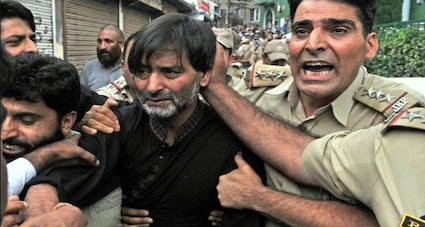 A Special NIA Court in Delhi has convicted terrorist Yasin Malik after he pleaded guilty in the terror funding case.

The court also sought an affidavit from the J&K separatist leader regarding his financial assessment and asked NIA to submit a report on the same. The argument on his sentence will take place on the next date of hearing, on May 25.

Mohammad Yasin Malik pleaded guilty to all the charges in a case related to alleged terrorism and secessionist activities that disturbed the Kashmir Valley in 2017. He had reportedly pleaded guilty to charges under the Unlawful Activities Prevention Act (UAPA).

He is expected to get life imprisonment. The court will hear the arguments regarding the quantum of sentence for the offences levelled against Malik.

The charge sheet was also filed against Lashkar-e-Taiba (LeT) founder Hafiz Saeed and Hizbul Mujahideen chief Syed Salahuddin, who have been declared proclaimed offenders (PO) in the case.