Yogi Adityanath: Those who feared to show Hindu-ness are chanting Rama and Krishna 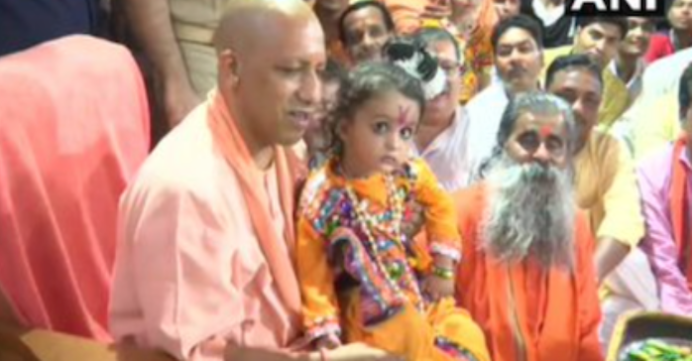 Uttar Pradesh Chief Minister Yogi Adityanath took a dig at those who fear to show their Hindu-ness for the fear of being painted as communal but are now chanting Bhagwan Rama and Krishna.

“Those who were earlier afraid to got to temples, due to fear of being labelled as communal, are now saying Rama is mine, Krishna is also mine,” UP CM Yogi Adityanath quipped.

CM Yogi was in Mathura on the occasion of Janmashtami. He also offered prayers at Shri Krishna Janmasthan Temple there and addressed the people who had gathered at the Ramlila grounds in the city.

While speaking at that event, Adityanath pointed that political people have always refrained from participating in the celebrations of Hindu festivals.

He further added, “Hindus were asked to contend with various kinds of restrictions. In some cases, they were not allowed to celebrate certain festivals. In other cases, they were denied water, electricity or time constraints were imposed on Hindus to regulate the celebrations of their festivals.”

But mentioning that things have changed under Prime Minister Narendra Modi, he said, “for the first time in independent India, President of the country visited Ayodhya and saw the construction of the Ram Temple. This was made possible under PM Modi’s new India,” he added.

He said their government will not only take the state closer to the world of technology-driven development but will also preserve cultural and religious heritage.

CM Yogi also mentioned that he would pray to Bihari Lal to kill the demon of coronavirus just like that he had killed many demons in his life.