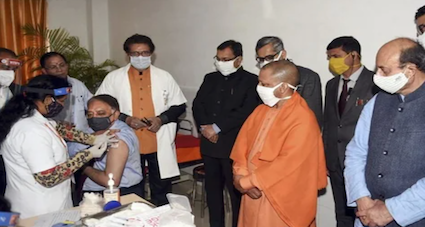 Uttar Pradesh government is to spend Rs.100 billion to vaccinate its population of 240 million people and has held early talks this week with companies such as Pfizer and the local distributor of Russia’s Sputnik V.

Providing details of the big move, Navneet Sehgal, additional chief secretary, information, UP govt, mentioned that Johnson & Johnson could also confirm their participation in the tender.

Talking about the budget, he said that the state government is diverting money from other sectors to buy the vaccines.

Uttar Pradesh has also held pre-bid talks with Indian vaccine companies the Serum Institute of India and Bharat Biotech as part of a global tender to buy 40 million doses over the next few months.

The move by UP comes after many other Indian states curtail vaccinations due to severe shortages amid a record surge in coronavirus infections.

Apart from this, chief minister Yogi Adityanath has also decided to provide oxygen cylinders to covid-19 patients who are undergoing treatment at their homes.

According to the latest figures, the Uttar Pradesh Government, in the last 24 hours, made 26.44 MT of oxygen available to almost 3471 corona infected people undergoing home isolation.

The special team Team-09, which is formed to manage the covid condition in the state, has been asked to identify points where cylinders can be distributed. The cylinders will be issued to a person whose Covid-19 report or those whose x-ray, chest CT or blood test report shows them positive for Covid-19, the order said.

Furthermore, on the instructions of CM Yogi, an online oxygen monitoring system has also been launched. Under this system, the government has opened a special Command Control Centre (CCC) at the Home Department in Lucknow.

The UP government’s drive for house-to-house Covid-19 testing has come for praise from World Health Organization which said: “The Uttar Pradesh government has deployed 1,41,610 teams and 21,242 supervisors from the state health department to ensure all rural areas are covered with this Covid-19 case finding activity.”

The Yogi Adityanath government has been taking several measures to flatten the Covid curb including the extension of the statewide lockdown till May 17.