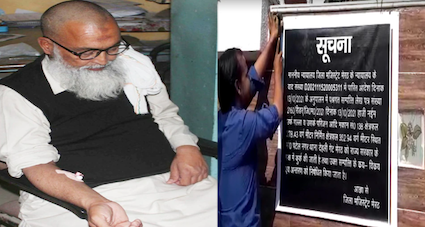 Uttar Pradesh Police took a major action in Meerut by seizing crores of property of Haji Galla, the biggest Kabadi of the Western part of the state, on the orders of the city Magistrate.

Hundreds of cars and two-wheelers are being stolen every day from places like Delhi, Uttar Pradesh, Haryana, Punjab etc. were sent to the Sotiganj area of ​​Meerut where junkies like Haji used to cut stolen vehicles. The good parts are kept aside to be sold at the shops and some are “transplanted” into another sedan at the market.  70-year-old Galla and his four sons have been leading this illegal highly profitable car breaking business. However this, time security agencies got a strong hold over him.

According to ASP Suraj Rai, action against Haji Galla, who’s also a history-sheeter of Sotiganj, has been taken under the Gangster Act and the police have confiscated his two houses and a warehouse worth five crores under section 14A.

Rai said Galla has more than 30 cases filed against him including murder. “This is not the first time he is behind bars, but this time we are on an all-out war against this illegal business. He and his four sons were booked under section 411 (dishonestly receiving stolen property, 414 (voluntarily assisting concealing or disposing of stolen property), 420 (cheating) apart  from the Gangster Act in September,” Rai informed.