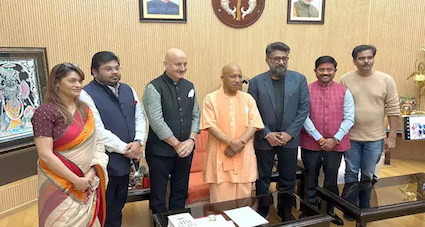 “The film boldly reveals the inhuman horror of religious bigotry and terrorism,” said Yogi Adityanath in a tweet.

Saying that the film will work to make society and the country aware, the UP CM congratulated the entire team for producing a thought-provoking film.

Like several BJP-ruled states, Uttar Pradesh has made ‘The Kashmir Files’ movie tax-free.

Earlier today, the BJP said that the movie has initiated a conversation and let it build up.

Hitting out at the former Union Minister and Congress leader Jairam Ramesh for saying the film incites hate, BJP national general secretary (organisation) B.L. Santhosh said that it is better to leave the narrative and conversation to take shape on their own.

“Kashmir Files has initiated a conversation. Let it build up. Let’s see it will be hate or pain or unfoldment of truth or something else. You branded, in the same way, many developments post-independence,” he tweeted.

The Bollywood movie has also earned praise from Prime Minister Narendra Modi, Home Minister Amit Shah and RSS chief Mohan Bhagwat. At a BJP Parliamentary Party meeting, PM Modi had said that attempts were being made to discredit the film.

The BJP has also countered former Chief Minister of Jammu and Kashmir Omar Abdullah’s claim that the film is not fully factual and asked which part of the movie ‘The Kashmir Files’ does he find untrue.