Yogi overwhelmingly is the choice as a leader in UP: Poll 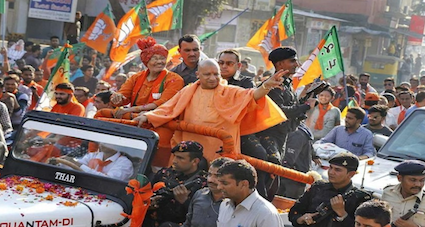 Most in Uttar Pradesh consider Yogi Adityanath as the best chief minister while Congress-in-charge in the state, Priyanka Gandhi Vadra is deemed inefficient, placing her at the bottom of a survey done by Matrise News Communications.

Some 48% opined that BJP under Yogi Adityanath would emerge winners.

Adityanath appears to have improved his positioning from a Hindutva icon to a development one with 46% of voters has considered him the best performing chief minister of the state. Mayawati got 28% votes, with Akhilesh Yadav at third place with 22% votes.

It also shows that Yogi Adityanath’s good handling of covid-19 pandemic’s second wave has had a good effect on the populace. Some 73% opined that Yogi was successful in handling the Covid-19 crisis.

Some 64% of Brahmin votes were in favour of Yogi Adityanath while Congress could manage on 12% support. Significantly the Dalit Votes too, some 43%, prefer BJP while the BSP supremo Mayawati is only marginally ahead at 45% support.

On the law and order front, some 54% women felt they were safe under the Yogi govt. Some 34% felt the same about Mayawati while only 12% voted for Samajwadi Party. Congress failed to muster any significant number.