Yogi’s One District One Product scheme is transforming Uttar Pradesh 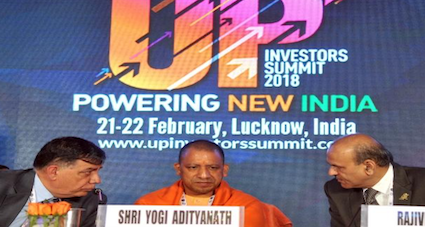 The ambitious scheme, One District, One Product (ODOP), of Uttar Pradesh Chief Minister Yogi Adityanath, has transformed the state into an emerging India’s industrial hub.

The Minister for Micro, Small and Medium Enterprises (MSME) in Uttar Pradesh, Sidhartha Nath Singh said that state government consistent efforts has turned the state “into a favourable place for industries to grow, such as the ODOP (One District-One Product) program, because of which the exports of UP have skyrocketed by 35 percent.”

ODOP, launched in 2018, was aimed at giving a significant push to traditional industries synonymous with the respective districts of the state.

Singh said that Common Facility Centres (CFCs) had been set up in 40 out of these 75 districts, and MoUs have been signed with online platforms like Amazon, Flipkart, and eBay to handle the marketing and promotion of the products from these districts.

Singh, during his virtual meet, also informed that for the first time, they disbursed loans worth Rs 2.5 lakh crore to the MSMEs in the last four year and this, in return, has brought a whopping  Rs 4 lakh crore investment to the state.  It has increased the direct and indirect employment opportunities in the state

According to the survey conducted on three lack units, it was revealed that about 2.6 crore people had got employment through the MSMEs.

Navneet Sehgal, Additional Chief Secretary (ACS), MSME, said, “ODOP is a big reason for the increase in the exports of UP. For this, efforts were made at every level and an export policy was formulated. An Export Development Centre has been set up at the district level. The export of the state was Rs 88,967 crore in 2017-18, which has increased by 35 per cent to Rs 1,21,139 crore in 2020-21.”

Yogi Adityanath has already proved to be an able administrator. His enforcement of law and order with an iron fist and no-nonsense attitude towards bureaucracy has earned him fans across India.