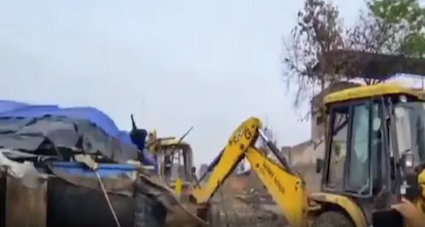 The Uttar Pradesh government got a piece of its land allegedly encroached by Rohingya refugees in Delhi cleared, according to officials.

The 2.10 hectare land estimated worth Rs 150 crore lies in Madan Khadar area of the national capital near Noida and belongs to the Irrigation Department of UP.

The minister further added, “They also built a makeshift mosque which could have led to a conflict later. In matter of national interest, the land was cleared. I had earlier written to the Delhi CM for action as well, but there was no cooperation. I thank the L-G for the help provided and in the coming days, more action will be taken.”

It was reported that those illegal Rohingya settlers were getting government benefits and Aam Aadmi Party Okhla MLA Amanatullah Khan were accused of providing a huge amount of ration to them.

Ever since coming to power, the Yogi Adityanath dispensation had been taking major action against the land mafia in Uttar Pradesh.