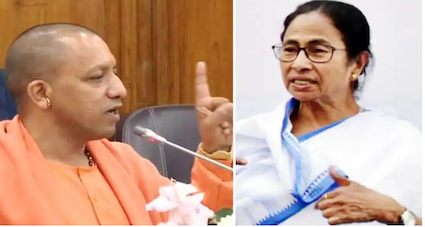 Speaking on the motion of thanks on the UP Governor’s address to the state legislature, Adityanath on Friday said that the elections in Uttar Pradesh were held peacefully. But, he said, Mamata Banerjee had come to UP to support the Samajwadi Party of Akhilesh Yadav. He listed the number of violent incidents and the number of people including BJP workers who were killed.

Yogi said that in all, over 12,000 incidents of violence took place in 142 of 294 assembly constituencies. “25,000 booths were affected. Over 10,000 BJP workers were forced to go to shelter houses and 57 party workers were brutally killed. Over 123 women were assaulted. About 7,000 FIRs had been filed – this was the condition there,” the UP CM said.

Adityanath said that there was no violence during or after elections in Uttar Pradesh is an example of a good law and order situation in the state.

In May last year, after the Trinamool Congress returned to power, a series of violent incidents took place across the state. The BJP, which was hoping to win the election but came second with less than 100 seats, alleged that the TMC workers were targeting those who voted for the BJP. The saffron party also said that its workers were being targeted by the ruling party ‘goons’.

Assam Chief Minister Himanta Biswa Sarma on May 4 last year, the day when election results were announced, put out a tweet saying 300-400 BJP workers and their family members crossed over to Dhubri due to violence in Bengal. “We are giving shelter and food. Mamata Banerjee must stop this ugly dance of demonocracy,” he had said.

Meanwhile Suvendu Adhikari, who defeated Banerjee in Nandigram, extended his gratitude to Adityanath for highlighting the ‘dastardly’ post-poll violence incidents in West Bengal.