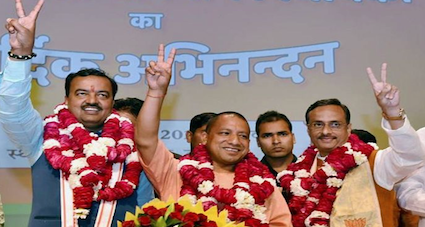 The Bharatiya Janata Party is leaving no stone unturned to win the Uttar Pradesh Assembly elections 2022. According to a report, BJP has prepared a mega plan regarding the upcoming assembly elections in Uttar Pradesh. . The leader who will contest polls includes – CM Yogi Adityanath, Dy CMs Keshav Prasad Maurya and Dinesh Sharma, and BJP leaders Swatantra Dev Singh, Mahendra Singh.

Yogi Adityanath is to contest from one of the seats from Gorakhpur, it was claimed in a report.

The recent thumping victory of the saffron party in zila panchayat and blockhead elections has also established the political skills of chief minister Adityanath.

Prime Minister Narendra Modi, during his recent visit to Varanasi, had heaped praises on Yogi for handling the Covid-19 pandemic. PM Modi said the way Yogi had controlled the second Covid wave was “unprecedented.”

Meanwhile, several fronts have cropped up to challenge the ruling BJP. While Suheldev Bharatiya Samaj is eyeing an alliance with AIMIM, Azad Samaj Party, Pragatisheel Samajwadi Party; parties like AAP, Shiv Sena, and JDU have announced that they will be contesting for the UP polls. Bahujan Samajwadi party and Samajwadi Party have already declared of contesting elections without any ally.