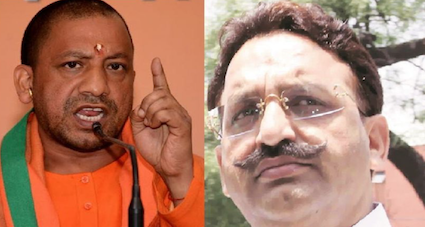 Acting on Chief Minister Yogi Adityanath’s orders to take action against mafia elements, the UP government seized assets worth Rs 1.18 crore belonging to gangster turned MLA Mukhtar Ansari’s wife Afsha Ansari and his brother Sarjeel Raza under section 14(1) of the Gangster Act, which allows attachment of illegal properties, in order to effectively curb gangsters, mafias and criminals and their associates.

The UP government has seized the properties from Ghazipur in Delhi NCR. In June also the police had seized a luxury car of jailed Ansari, terming it “benami property”.

The government is also demolishing the illegal properties of mafias and their close aides. Apart from this, the state government has registered 5,558 FIRs under the Gangsters Act from January 2020 till April 2021.

Apart from this, cases against 800 gangsters and their close associates have also been filed. Most of these cases are filed against Mukhtar Ansari and Atiq Ahmad, who had a monopoly over Purvanchal and mocked the law.

The Yogi government has also seized illegal assets worth about Rs 1,000 crore of mafias, including Mukhtar Ansari, Atik Ahmad, Vijay Mishra, Sundar Bhati, etc. The Police had informed that 102 FIRs were lodged and 110 gang members of mafia-turned-politician Mukhtar Ansari were arrested during the period.