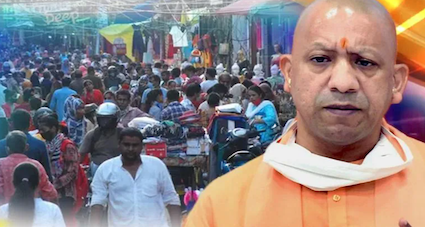 On the occasion of the World Population Day, Uttar Pradesh chief minister Yogi Adityanath unveiled the new population policy 2021-2030 for his state on Sunday.

The opposition Congress in the state has called it a “political agenda” and the Samajwadi Party said it is “murder of democracy”.

One of the key features is plans for the care of the elderly, apart from better management of education, health and nutrition of adolescents between 11-19 years. It has an innovative proposal to set up “Health Clubs” in schools as well as digital tracking of infants, adolescents and elderly people in line with the spirit of the Digital Health Mission.

Meanwhile, the State Law Commission has also prepared the draft of the Uttar Pradesh Population (Control, Stabilization, and Welfare) Bill-2021, on which the public can give suggestions till July 19.

In the draft of the Uttar Pradesh Population (Control, Stabilization, and Welfare) Bill-2021 issued by the State Law Commission, ‘Bacche Do He Acche’ has been highlighted.

According to the proposal, parents who limit their family to only two children and are in government service and undergoing voluntary sterilization will be given facilities like two additional increments, promotion, exemption in government housing schemes, increasing employer contribution in Provident Fund (PF)

There are also provisions to provide exemptions in water, electricity, house tax, home loan, and other such facilities to couples with two children who are not in government jobs.

If the law is implemented, then within a year, all government officials, employees, and elected representatives of local bodies will have to give an affidavit that they will not violate this policy. Ration cards would be limited to four units.

It is proposed in the draft that the election can be cancelled if the rules are broken.

Free education up to graduation level, scholarship for higher studies in case of a girl child and preference to the single child in government jobs are other benefits which couples with a single child will receive.

This Act shall be called the Uttar Pradesh population (Control, stabilization and Welfare) Act, 2021, and it will extend to the whole of the state. It will come into force after one year from the date of publication in the Gazette.

A State Population Fund would be constituted, and it will be utilized to implement this Act.

Last month, Iqbal Mehmood  — the Samajwadi Party’s MLA from Sambhal — said that any law on population control would be a “conspiracy” against Muslims.