Yogi warns Owaisi: I know how to deal with you 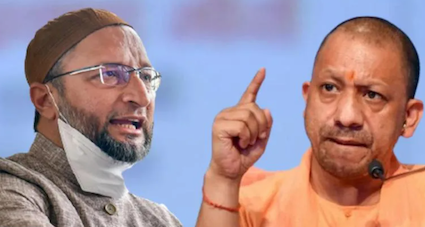 Asaduddin Owaisi, president of the All India Majlis-e-Ittehadul Muslimeet (AIMIM), has been warned by Yogi Adityanath, no less, the chief minister of Uttar Pradesh.

Yogi didn’t quite take his name but warned that those who provoke people of Uttar Pradesh in the name of Citizenship Amendment Act (CAA) would be dealt with strictly.

Tweeted Yogi: “I want to warn that person who is provoking people in the name of Citizen Amendment Act. I want to warn the followers of Chacha Jaan and Abba Jaan to listen carefully. If you try to spoil the atmosphere by inciting the feelings of the people of Uttar Pradesh, the state government knows how to deal strictly with you.”

Yogi further claimed that it was being done at the behest of the Samajwadi Party. “Everyone knows Owaisi is trying to incite people on the behest of Samajwadi Party in the state. However, Uttar Pradesh has moved ahead in a way that it is known as the riot-free state,” said Yogi while addressing a rally in Kanpur.

After Farm Laws were repealed by the Prime Minister on November 19, Owaisi is asking for similar protests to have the CAA repealed. Owaisi had said during a campaign in Barabanki thus: “If the government forms laws for NPR and NRC, we will come again on the roads and create Shaheen Bagh right here. I will come here myself. Repeal CAA as well.”

While talking to Zee News, Owaisi said, “We are demanding that CAA should be repealed. By forming a law keeping the religion of people in mind, the Modi government has violated Article 21 of the Constitution. The law must be repealed else Muslims would come again on the roads.”

The UP assembly elections are due in early 2022. AIMIM is in fray and hopes for Muslims in the state to prefer it over regular parties like Congress and SP.