You even didn’t build a hospital, Irani lists Gandhis’ ills in no-holds-barred attack 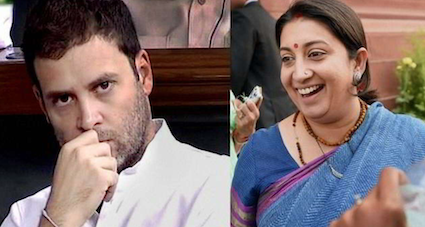 Union Minister Smriti Irani lashed out on Congress leader Rahul Gandhi for claiming that Bharatiya Janata Party is “selling the country’s crown jewels, built over 70 years with public money, to his industrialist friends” with its just-launched National Monetisation Pipeline (NMP).

In no-holds-barred attack, Irani hit back at Gandhi by referring to the policy by his mother and current president of Congress, Sonia Gandhi.

She explicitly brought Rahul Gandhi’s hypocrisy to the table by mentioning how the UPA government, in their times,  initiated the process of privatization.

She said, “In 2008, a Request for Proposal (RFP) with reference to the New Delhi railway station was announced when the Congress government was at the Centre. Is Rahul Gandhi alleging that the government headed by his mother was audacious enough to sell the country?”

Irani, who represents UP’s Amethi constituency in Lok Sabha, further said that the Gandhi family, which couldn’t even built a district hospital in Amethi, is instructing about privatization.

“In 70 years of Independence, the district the MP led (Amethi) did not even get a district hospital,” she stressed.

She equated Rahul’s politics with hypocrisy and arrogance and said that in Maharashtra, where Congress is in alliance, the govt raised Rs 8,000 crores by monetizing the Mumbai-Pune expressway. Is Rahul Gandhi alleging that the Maharashtra govt sold the expressway?” she asked.

She said, “Their problem is that 6 lakh crore rupees will come from this disinvestment. That’s why they are having trouble.”

Her comments came after Rahul Gandhi had accused the Central government of the National Monetisation Pipeline (NMP) plan, alleging that the BJP-led government is selling all assets created in the last 70 years.

It is also worth noting that while he justified the privatization done by his party using fancy terms like “logical and different,” he targeted BJP government’s privatisation exercise, alleging it was designed without any ex-ante criteria and is done to cover up their mismanagement of the economy.

Meanwhile, The government had clarified that it would only monetize the under-utilized assets, and the ownership will remain with the Centre

“National Monetisation Pipeline talks about brownfield assets where investment is already being made, where there are assets either languishing or not fully monetised or under-utilised,” finance minister Nirmala Sitharaman had said on Monday.