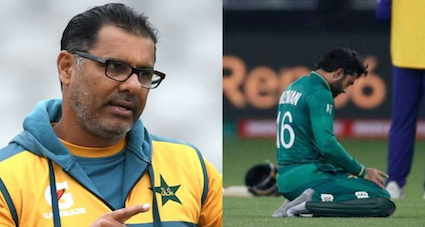 Former Pakistan pacer Waqar Younis has apologised for his ‘namaz’ comment which disappointed sports fans across the globe following Pakistan’s game against India in the ICC Men’s T20 World Cup 2021.

Younis, who is also the Pakistan cricket team’s former bowling coach and resigned just a month before the start of the ICC T20 World Cup, was slammed by former India cricketers and commentators for his controversial statement that opener Mohammad Rizwan offering namaz “in front of Hindus (during the match) was very special to him”.

“The manner in which Babar and Rizwan batted, the strike-rotation, the look on their faces, it was amazing. The best thing, what Rizwan did, Mashallah, he offered the Namaz on the ground surrounded by Hindus, that was really something very special for me,” Waqar had said.

His comments did not go well with sports commentator Harsha Bhogle. He called the statement “dangerous” and said that the cricket world needed to be united and not divided by religion.