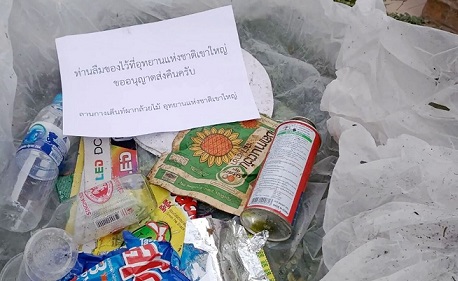 If you leave trash in a national park in Thailand, there are chances it would be mailed to you by the authorities.

Concerned that litter and garbage at Khao Yai National Park could endanger the lives of animals that eat the litter while foraging for food, the country’s environment minister has thought of this new method of dealing with the problem.

“I will pick up every single piece of your trash, pack them well in a box and mail it to your home as a souvenir,” the minister, Varawut Silpa-archa, said in a Facebook post.

A maximum of five years in prison and a fine of up to $16,000 could await those who litter in a Thai national park.

“You may take only two things from our parks,” Mr. Varawut wrote on Facebook, addressing would-be campers. “Those are memories and photos. Leave only footprints behind.”

Not just a threat, the box of trash to campers had left behind indeed are being posted at their address. It comes with a pointed massage that they have been blacklisted from returning to the park.

“You have forgotten some of your belongings at the Khao Yai National Park,” read a note to the campers, “Please let us return these to you.”

Garbage, trash, litter is a worldwide catastrophe in our times. It is clogging up oceans, showing up in stomachs of dead whales in countries such as Indonesia and Spain.

The Great Pacific Garbage Patch has an area which is twice the size of Texas at 617,764 square miles. Scientists say there are five known heaps, one in the Indian Ocean, two in the Atlantic Ocean and two in the Pacific.

In recent times, trash has political connotations. Some countries in Asia and Africa are refusing to accept the trash shipped from Western countries.

In 2017, China restricted importation of scrap metals such as paper and plastic. Malaysia and Kenya are doing the same.