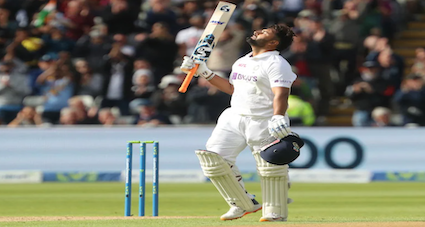 Wicketkeeper-batter Rishabh Pant was at his best in the first innings of the ongoing Edgbaston Test against England as he went on to play a knock of 146 to help India stage a fightback. The visitors were 98/5 and it was then that Pant and Ravindra Jadeja put on 222 runs for the sixth wicket. Pant’s knock was studded with 20 fours and 4 sixes. Former India opening batter Virender Sehwag had praised Pant on Twitter, saying wicketkeeper was “in a league of his own”.

“Pant is in a league of his own. The most entertaining cricketer in the world, this is a special one,” tweeted Sehwag.

Pant, on Saturday, reacted to Sehwag’s praise, saying: “@virendersehwag bhaiya .. love this. you are one of the greatest and one of the best.”

Talking about his knock after the close of play on Day 1, Pant said: “”I like the opposition (England) but I do not think about it much. I just look to give my 100 per cent in every match. My focus is on the cricket I play. From childhood, my coach Tarak sir told me that you can hit the ball, but work on your defence as well.”

“I keep working on my defence, in Test cricket, defence is important. Every ball you cannot hit, so i keep focusing and if i think I need to defend, I defend and if I think I can hit the ball,( I hit),” he added.

There was a moment when coach Rahul Dravid, who usually isn’t prone to exulting or showing his emotions to camera, let out his feelings after Pant scored his century.