Youth have no choice but to pick up arms, claims Mehbooba in a shocker 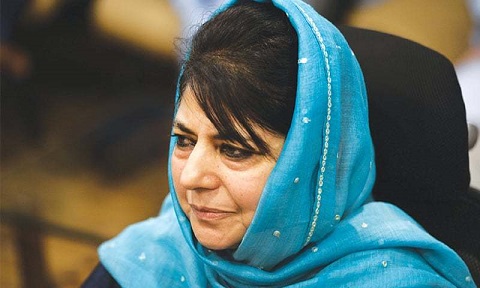 People’s Democratic Party (PDP) chief Mehbooba Mufti seems to specialise in making outlandish statements every now and then. On Monday, she had another shocker when she claimed that the youth in Kashmir had no choice but to pick up arms.

“The youth today believes that now that they have no choice, it is better to pick up weapons and die”, she said while addressing mediapersons in Jammu. Militancy had seen a very significant spike after the abrogation of Article 370 last year, she claimed, adding that “every day 10 to 15 youth” were picking up arms in the countryside.

This is gross exaggeration as 10 to 15 youth have not picked up weapons even on a monthly basis from the entire Valley during the last one year. Incidentally, she did not provide any documents to back her claims.

Mehbooba said the state flag, to which she had referred in her presser at Srinagar over a fortnight ago, has been “wrongly snatched away from them”. She was ambivalent regarding her earlier statement about the Tricolour which had led to strong resentment towards her. This had created a strong wave of resentment towards her and the PDP in the Jammu region.

Her party, the PDP, is a part of People’s Alliance for Gupkar Declaration (PAGD), formed in Srinagar on October 15. The alliance parties have declared that restoration of “special status” of J&K, back to pre-August 5, 2019, is their basic agenda.