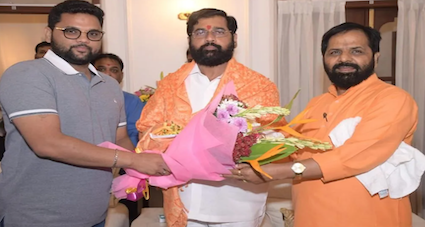 On Tuesday night, Vikas was seen at the Chief Minister’s residence, where he formally extended his support to the Shinde camp on the occasion of Guru Purnima. He also claimed that more than 50 office bearers of Yuva Sena will be jumping ship by the end of this week. Vikas’ father Bharat Gogawale is the chief whip from the CM Shinde faction.

On Tuesday, Maharashtra CM Shinde claimed that many leaders of Uddhav Thackeray’s Shiv Sena faction are in touch with him. He was reacting to the speculation that 12 out of 18 Sena Lok Sabha MPs are willing to join hands with his camp.

Shinde attributed the support for the new government to the rebel MLAs taking forward late Balasaheb Thackeray’s ideology and allying with BJP once again.

Forty out of 55 Shiv Sena MLAs are backing the government which has the support of 106 BJP MLAs, MLAs of smaller parties and Independents. Two Sena MPs – Bhawana Gawli and Shrikant Shinde – are a part of his camp.

On June 30, Eknath Shinde was sworn in as the Chief Minister of Maharashtra and Devendra Fadnavis as the Deputy Chief Minister, the rest of the ministers are yet to be sworn in. Uddhav Thackeray-led Shiv Sena has filed a petition seeking disqualification of Shinde and 15 MLAs of his faction.

Over the past weeks, Maharashtra’s political landscape remained on the edge with Shinde rebelling against the MVA government, causing Shiv Sena chief Uddhav Thackeray to resign as CM. Shinde was appointed as the new CM, who also won the floor test on Monday by a 164-99 margin, proving his government’s majority and cementing his position as Chief Minister of the state and the leader of the Shiv Sena.