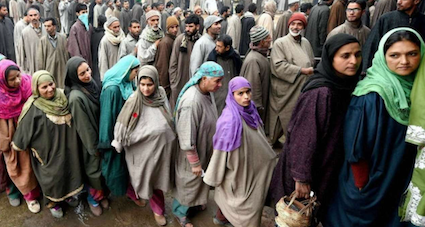 Once again, for the last few days, delimitation has become a topic being discussed in this part of India we call Jammu and Kashmir. Some days ago, Delimitation Commission issued a statement saying that it will hold a meeting with the associate members on December 20 in Delhi. This created a flurry of excitement here. Two National Conference Lok Sabha MPs, Husnain Masoodi and Akbar Lone, said they had been given invitations for the meeting but its agenda has not been disclosed.

This created some uncertainty about their participation as the NC had boycotted its meeting held in Jammu on February 18. The third NC MP, Dr Farooq Abdullah, who commanded them to speak up in a tone raising questions about the commission, said nothing on record! It may be mentioned here that all five Lok Sabha MPs from the Union Territory of Jammu and Kashmir are associate members of the commission. Besides the NC MPs, two BJP MPs, Dr Jitendra Singh (MoS in PMO) and Jugal Kishore Sharma, are the other associate members.

Acting swiftly, the commission then sent emails to the NC parliamentarians telling them about the agenda.

By all available indications, the Central government appears keen that the delimitation is completed within the next few months. It is pertinent to mention here that the commission headed by Justice (retired) Ranjana Prakash was given a one-year extension till March 2022 earlier this year. Some political parties have said that the commission should not be given any more extension. So that it submits its recommendations on time paving the way for elections to 90-member assembly in the coming summer.

Of late, there has also been a flurry of political activity in the Union Territory (UT) of Jammu and Kashmir, with various political parties holding public meetings. The National Conference and Apni Party have been busy in their public outreach programme. For almost a month now, veteran Congress leader Ghulam Nabi Azad has been busy touring most parts of the UT. Earlier, he had held some rallies in Kashmir and reached out to his supporters, particularly former legislators.

Azad’s activism has deepened the factionalism in the local Congress as many of his supporters have resigned from party posts, in a calibrated manner. The other faction is headed by Saifuddin Soz, whose confidante Ghulam Ahmed Mir was the J&K Congress chief till Thursday evening. A one line signed letter from Congress general secretary K C Venugopal has emerged saying that senior party leader Raman Bhalla has been made in charge of the UT Congress in Mir’s place.

In 2002, 2008 and 2014 assembly elections, it was the Jammu region from where the Congress had more MLAs. However, many party leaders from the Kashmir valley were made MLCs, riding on support of the party MLAs from Jammu. Somehow, all these years, the party was also headed by someone from Kashmir despite having wider support base in Jammu. Bhalla hails from Jammu city and is easily approachable to common people. This is the USP of his popularity but he is being made party chief at a time when there is not much left of the party in Jammu, or in Kashmir. Expecting him to be able to revive the party’s fortunes seems a very uphill task, more so when someone like Azad is ranged against Bhalla’s faction.

Tussle between the two factions is out in the open and it seems Azad faction is gaining more traction as he is scheduled to hold some more public rallies in the coming days. It seems like he is galvanising his supporters for wresting control of the UT unit. Alternatively, will it be too much to expect him to walk out of the Congress like Captain Amarinder Singh did in Punjab?

Be that as it may, the BJP too is holding public rallies here and there.  D S Rana, the new party acquisition from the NC, has of late emerged as one of the most active leaders in the party.

We can talk here about the relative strengths of the party and see what sort of assembly is likely to emerge after the next elections. At present, a hung assembly seems like the most likely result if and when assembly elections are held after a fresh delimitation. This can be safely assumed as in 2002, 2008 and 2014, during the last three assembly elections, no party was able to score more than 28/87. In 2002 and 2008, the NC had 28/87 and in 2014, it was PDP which scored 2/887, always necessitating a coalition government. This number emerged as a sort of benchmark in the last three assembly elections and the trend may hold firm in 2022 also.

The NC, the PDP, the People’s Conference and Apni Party have fragmented political space in Kashmir valley. The BJP, as also the Congress, will be lucky if they manage to win a seat or two in Kashmir, despite claims to the contrary by both. A total washout for both these parties in Kashmir is also not a result which should surprise anyone. Incidentally, it was in May 1983 that any party had won a clear majority on its own riding on people’s support.

In 1996, NC had got enough seats on its own, but it was being propped up by agencies which were battling Pak promoted terrorism. In 2002, 2008 and 2014, elections led to hung assemblies. In 2022, the BJP can emerge as the largest single party in the assembly, riding on its vote and seats in the Jammu region. But for forming a government, it may have to take the help of smaller parties and that seems like a forgone conclusion. Incidentally, serious campaigning by Prime Minister Narendra Modi in 2014 led to the party winning 25/87 seats, a far cry from 44 needed for an absolute majority then. Modi was freshly minted PM at that time.

In 2022, it seems that even if he campaigns for the BJP candidates in J&K, he would not be able to ensure 46/90, a clear majority, in the new assembly. It seems the era of coalition governments is now a political reality of J&K from which no party can escape. In Kashmir, it is widely believed that Apni Party of Altaf Bukhari and PC of Sajad Lone can prop up a BJP-led government. These are the parties that can keep both NC and the PDP bogged down in the areas which were once their strongholds.

A question that is being asked by enough observers in Kashmir today is whether the PDP will be reach a double digit figure in 2022. It had scored 16/87 in 2002, 21/87 in 2008 and 28/87 in 2014 elections, its tally rising in each successive election. That does not look like a scenario unfolding now, given the party has seen massive desertions, and systematic undercutting by the BJP since June 2018 when their coalition broke up.