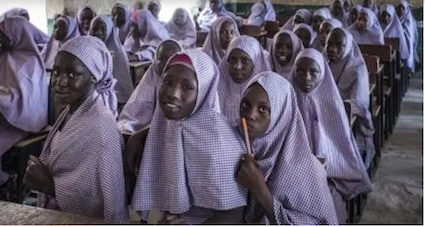 More than 300 schoolgirls have been kidnapped by unidentified gunmen from a school in north-western Nigeria.

This is not the first time that mass kidnappings have been from school in recent weeks in this part of the world.

At least 42 people, including 27 students, who were kidnapped last week in Kagara, in neighbouring Niger state, are yet to be released.

Reports claimed that it was carried out by Bob Haram, the same Islamist militant group which took 276 schoolgirls in the northeastern town of Chibok in 2014.

A teacher said a group of gunmen arrived at the school in Jangebe town with pick-up vehicles and motorcyles on Friday midnight. Some of the gunmen were dressed as government security forces. They forced the schoolgirls in the vehicles, a report said.

However, other witnesses have told the BBC that the armed men arrived on foot at the school.

“They broke the school gate and shot at the security man. Then they moved into the hostels and woke up the girls, telling them it was time for prayers. After gathering all of them, the girls were crying and they took them away to the forest. They were also shooting in the air as they were marching to the forest,” an eyewitness said.

Distraught parents later gathered outside the school and some have gone out into the bush to look for their daughters, witnesses say.

A teacher told the BBC that of 421 students in the school at the time, only 55 had been accounted for.

Mr Buhari said that although authorities could deploy “massive force against the bandits”, there were fears that the schoolgirls could be used as human shields.

No group has so far claimed responsibility.

The government does not appear to have a strategy for stopping these incidents from happening.